It only takes one person to make a difference. David Schantz serves as an example of one of those people who can change the world for the better. 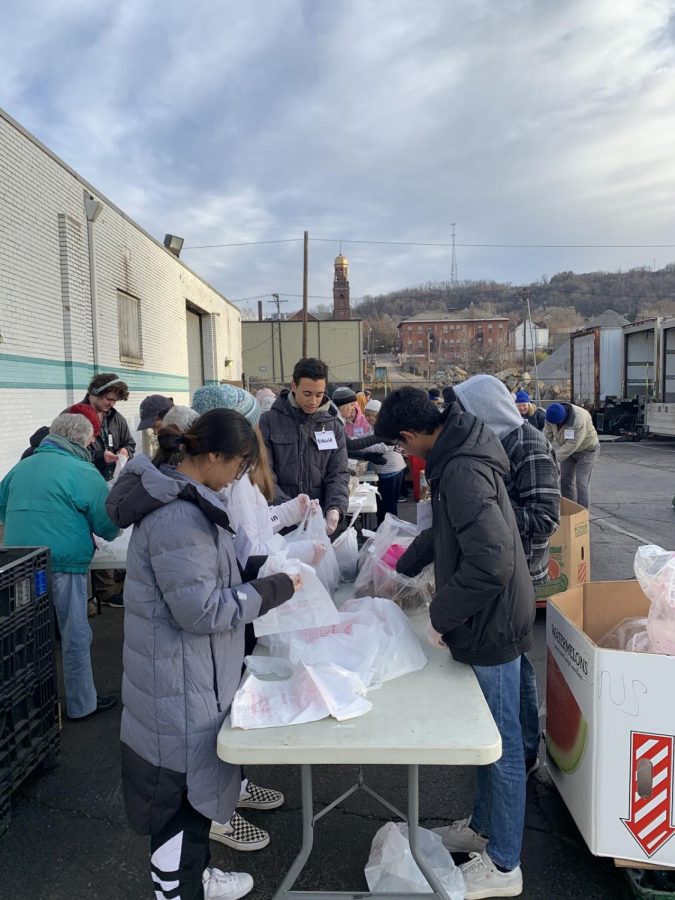 A usual Saturday morning for most teenagers include sleeping in, playing numerous video games for hours on end, and watching the same episodes of their favorite TV show over and over. But, there are some teenagers who wake up early on their day off school to go help and support others who need aid. These are the people who want to make a change.

David Schantz, a sophomore at NAI, is one of these people. Schantz observed a constant and ongoing issue of local hunger in Pittsburgh. He has hence decided to partner with the Greater Pittsburgh Community Food Bank to transform the lives of those struggling with hunger.

NAEye has decided to interview Schantz to encourage readers to gain a further understanding of local issues, such as hunger, and to hear from a student who simply wanted to make a change.

NAEye: What pushed you to want to make a change in the community, specifically local hunger?

Schantz: That’s a great question because there are so many pressing issues at hand globally, but also locally, which is something I think a lot of people don’t fully realize. I felt the urge to try to combat local hunger because I’ve grown up in a family that has always made me aware of how so many people are at a loss for food. We have always advocated for the fight against hunger and poverty for as long as I can remember. I think if it weren’t for my parents I wouldn’t have realized how many seemingly well off people there are even locally that actually are in dire need of food and supply.

NAEye: Why do you see hunger in our community as a problem that needs a solution?

Schantz: I see hunger as a very key issue in our community for a variety of reasons. To start, it affects a diverse and unfortunately large population. There’s no specific “person” that hunger is affected by, as many unique circumstances on any given individuals life could arise, creating a lack of access to food. Because of this, I think it is essential to make sure these people have food available during their times of need.

NAEye: Why did you choose to partner with the Greater Pittsburgh Community Food Bank?

Schantz: So I didn’t necessarily choose them at first, I had reached out to Feeding Pennsylvania, who is a subpart of Feeding America. Through some discussion and planning, we both agreed that doing more localized work could actually make a bigger impact, and so they helped me transfer to the Greater Pittsburgh Community Food Bank.

NAEye: How do the distributions and events work?

Schantz: Each event is usually different, however there are some repeats on certain activities. There are some more typical forms of events, such as fundraisers and donations. The fundraisers we have been planning each have different themes, as well. More interactive events, such as Produce to People, include organizing food followed by actually distributing it to people in a sort of grocery like setting where we help them pick up what they need.

NAEye: How many people on average does your partnership help feed?

Schantz: During the larger distribution events, around 700+ families are being served. Fundraising and other less indirect forms of provision help can either help impact a specific group, or more commonly the majority of the hungry population in Allegheny County, which is over 150,000. So it varies based on the activity.

NAEye: What has been your favorite part about your journey to solving local hunger?

Schantz: My favorite part has to be interacting with people and seeing the joy on their faces when they receive their items. You meet so many people and it’s just such a meaningful and unforgettable experience.

NAEye: If someone wants to contribute towards your solution, how could they do so? If they cannot volunteer time, can they donate food or money?

Schantz: They can contribute by participating in any event simply by reaching out to me, and we can take it from there. If you’re unavailable to volunteer, we certainly do accept donated food and/or money. Again, just reach out!

NAEye: What would you say to other young people who want to solve a problem or make a change in their community?

Schantz: From my experience, I would advise people to reach out to other people experienced in the issue they’re trying to solve for guidance. This way, you have more people assisting your purpose, and can provide with more direction. But even more important is to not hesitate or be afraid that your ideas are inadequate because any change is better than none. And we need lots of change.

NAEye: What greater educational purpose do you achieve from doing things like this?

Schantz: I would say by participating in things like this, you gain a wider understanding of just how many people out there are facing issues that people like you and me would never dream of having to encounter. I think this leads to less ignorance and hopefully it inclines people to want to make change themselves.