The Problem With “All Lives Matter”

All lives do matter, but that's not the point. 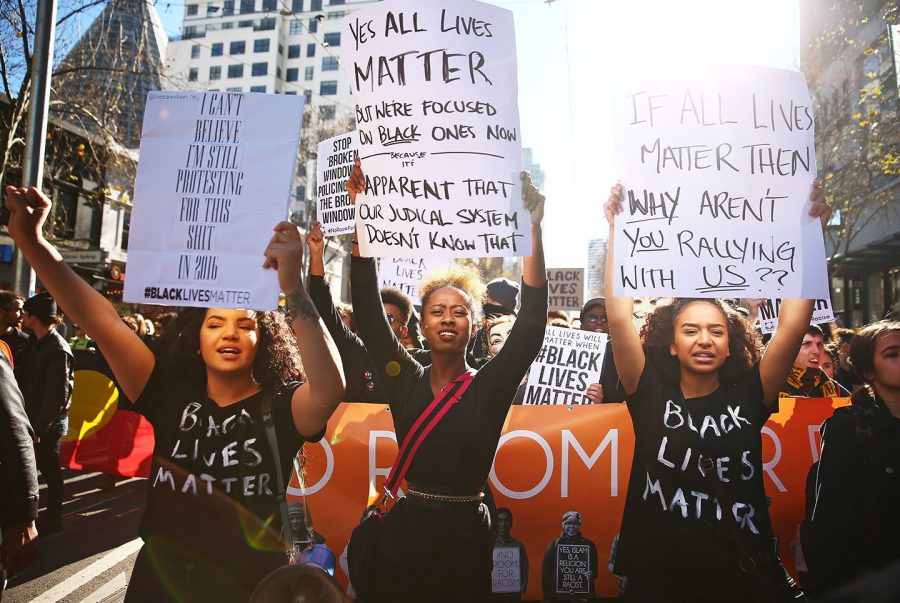 Yes, all lives DO matter, but that’s not the point. The point is that Black people have been held back in our society and still have to deal with the effects of systematic racism, even in a country where politicians have gotten slightly better at hiding the fact that it exists and comes with a multitude of problems.

An organization that has recognized these problems is Black Lives Matter. It is a chapter-based, member-led organization whose mission is to build local power and to intervene in violence inflicted on Black communities by the state and vigilantes. It emerged around five years ago and is now committed to creating a world where racism does not exist and every Black person is able to thrive socially, economically, and politically.

Their website reads, “We are guided by the fact that all Black lives matter, regardless of actual or perceived sexual identity, gender identity, gender expression, economic status, ability, disability, religious beliefs or disbeliefs, immigration status, or location.” The organization is inclusive and believes that fighting for a group that has been historically oppressed and marginalized is extremely important.

The expression “All Lives Matter” surfaced to weaken the idea of “Black Lives Matter.” People who used it were upset and felt like the organization advocating for civil rights did not care about their lives because they were not Black. Although it is somewhat of a natural human response to want to be a part of a group, it is clear what is wrong with this.

All lives DO matter. Black Lives Matter is necessary because the lives of Black Americans have often been left out of “all lives.” They have been seen as less than human and property. They are unfairly sentenced for nonviolent drug offenses and for this reason they make up the majority of our country’s prison system. They are more likely to live in poverty.

All of these things are caused by structural barriers that Black people experience in our country because of hundreds of years of discrimination.

Legislation that can fix these issues is completely possible. We can end the issue of mass incarceration causing thousands of people to go to jail for nonviolent drug offenses that never harmed themselves or anyone else. We can help those living in poverty and dealing with other problems that are difficult to get out of. It just depends on how willing the government is to do what they feel is best.

Blue Lives Matter lists their missions as “to raise awareness and enlist the public’s aid for the needs of police officers, to help police officers and assist each other, and to provide a police officer’s family with comfort and support as they go through hard times.” Although their missions are well intended, the organization grew in popularity because of the way that it can be used to undermine important problems that people of color deal with, especially regarding police brutality.

When it comes to police violence towards Black people compared to White people, the numbers are frightening.

Black people are three times more likely to be killed by police than white people. From 2013-2018, 21% of Black victims were unarmed compared to 14% of white victims. A new study finds that about 1 in 1,000 Black men and boys can expect to die as a result of police violence over the course of their lives. This is a risk that’s about 2.5 times higher than their white peers. Advocates for Blue Lives Matter often undercut the importance of this issue by paying more attention to bringing awareness to those on the police force than doing something about innocent Black people that are being abused and killed by them.

“The law cannot make a man love me but it can restrain him from lynching me, and I think that’s pretty important also.” This is what Martin Luther King Jr. said in a speech in 1966, conveying his hopes that one day our country’s legal system would be free from racial bias. This is important when we have to consider what can be done to prevent police violence against Black people.

Simple things that can be done to prevent instances where innocent Black people die are documenting police-related deaths and holding officers accountable. Informing the public about police killing and taking advantage of these innocent people will let communities be aware of what is going on, and holding officers accountable would set a standard for officers to be more considerate.

It all comes down to these questions. Do all lives really matter? Do all lives matter in our society if Black people still have to deal with racism after years of fighting? Do all lives matter if people of color constantly have to fight for themselves while our government watches them suffer because of the system that our founding fathers created?