As we begin to realize how much social media affects us, is it continuously becoming less of a necessity in each of our everyday lives? 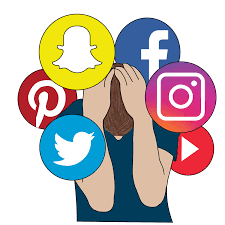 Ever since quarantine has begun, many people have found themselves becoming distant from many parts of their everyday lives. Whether it is relationships or even just the regular daily routine, everything seems off. A lot of people have even found themselves losing interest in something that tends to keep us all connected- social media.

I know it is not just us who feel like our phones are becoming less and less of a necessity every day. The only reason many people still go on Snapchat is for the few streaks and the memories they have saved. Instagram is a constant cycle of seeing the same models post a photo each day. TikTok is boring, and even though it has always been an app that many love to go on, recently people have not been enjoying the content released on the app.

The now unamusing social media could perhaps come from a loss of motivation from everyone, or it could be because of how we have all begun to realize the effect it has on our mindset and self-esteem. Without social media, we would not be exposed to the thousands of people who look at what others call “perfect”. Even though the concept of perfection is different in everyone’s minds, we teens seem to all have the same idea of what it looks like.

Standards are set into us teenagers’ minds by others on social media, and the truth is these standards are not only hard to reach, but they are impossible. We see models wearing size 0 clothes, and even though they may be subject to photoshop, these images are hard to ignore. Seeing people who fit these “flawless” standards, can make you think that everyone must have it together but yourself.

Many would think with the millions of things to do on your phone and social media that one could never get sick of it, however, the generation most affected by technology, gen-z, has proved that to be false. The constant comparison of your life to someone else’s is exhausting and extremely detrimental to your mental health. And after spending many more hours comparing during quarantine, people are starting to realize that social media is toxic.

While this is not the end of social media, it is a wake-up call to teens and adults around the world. We do not need social media to live, and we certainly do not need to look like the airbrushed models in our feed.