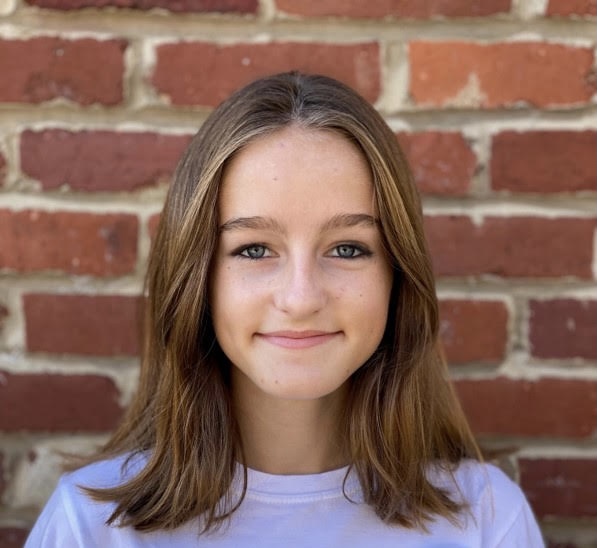 NAeye: What sport do you do?

EK: “I am part of the NA cross country team, we run 5ks on trails in the woods and other hilly terrains.”

NAeye:  How long have you been running?

EK: “I’ve been running since 7th grade, so three years.”

NAeye:   What was your highest achievement in your sport this season?

EK: “My biggest achievement so far is probably running a solid time in the time trials at the beginning of the season. The time trials held my place on the team and when I found out that I was going to be running with runners that I have idled through my running career, I was ecstatic. I am so honored to be able to run with these amazing girls, they are the best teammates and practice is always so fun.”

NAeye:  What are some challenges you face in your Sport?

EK: “The thing is, running is as much about mental strength as it is physical. If a runner is fit and capable of running some fast times, if they don’t have the mental strength to keep pushing even if they are tired and want to drop out, it makes the race hard to be prepared for. It is difficult to keep pushing at times when I am struggling and tired during a race, but when I remember my teammates and how they have been by my side throughout the season, it gives me a mental boost and a reminder of who i’m running for. As a freshman I don’t know the courses too well, and I have got lost on multiple occasions, although if I didn’t have my teammates yelling my name every time I take a wrong turn, I don’t think I would finish any races.”

NAeye: How do you keep in shape during your off seasons?

EK: “While I run cross country, most of my teammates and I also do long distance track, so there isn’t much of an off season. Coach knows this, so the indoor track season is usually laid back, according to my teammates. Even if we did have a long break, most of us would meet up to run anyway. I am not 100% sure what breaks we do have, but Coach will always prepare us to run the best we can, that includes taking breaks.”

NAeye: Why did you decide to stick with this sport and what do you love most about this sport?

EK: “When I joined the middle school cross country team and track team, I knew that I loved running. I used to swim, and while that was a great sport, I didn’t get the same rush that I do with running. My dad, who is also a runner, got me into it and always said that you never regret a run, whether it is a race or a jog in the park. I agree. One of the best feelings is when I finish a race, I don’t even know how to describe it, but my teammates call it ‘runners high’, it’s like a rush of accomplishment and relief that makes you want to run the next day and the day after that.”

NAeye: How do you prepare for your meets?

EK: “Coach always gives us great workouts, so we are never underprepared for a race, but the day before a race Coach gives us a pep-talk and a summary of what the course will be like, how we are going to run it, and what we need to do to prepare for the race. One of the big factors of pre-race day is eating right and sleeping well. It makes a huge difference if you eat burgers and fries the night before a race versus eating a fillet of salmon and some pasta. Water is always a must, generally the more you drink, the better. We have to try and drink lots of water regularly, but on the day before a race, it is crucial.”

EK: “The measure of how hard our runs are is usually determined by the minutes and the pace. At the beginning of the season, our minutes are usually less, but as we keep running, Coach adds minutes on throughout the season. At the very beginning of the season, we have time trials, and this is a base of what pace we should be running at and who we should be running with to give everyone the best season that they can. Our week is usually predictable though, we usually have three workout days and two recovery days, where our minutes aren’t necessarily less, but we run at what we call a ‘blue pace’, which is usually a fast jog instead of a hard run.”

NAeye:  What are some of the goals you would like to achieve in the future?

EK: “The team has won states two years in a row, and winning states three years in a row would be the first time in a while. Going to states would be amazing, as i’ve never experienced that before, but because of covid they are only taking the winner of WPIALs instead of taking a few teams. This means that to get to states, we need to win WPIALs, so that’s what our goal is as a team, and I think we can do it. I personally would love to just keep running with the team and not get injured. Most of my teammates can say that they have been injured at least once (due to no fault of their own). It really stinks to be sitting out with an injury, and because running is a sport very prone to injuries, it’s hard to avoid. I have been injured before, once with shin splints and another time with knee problems. The best thing I can do is stretch and ice my muscles, and Coach is great with helping prevent these injuries.”

NAeye:  Do you have any superstitions or routines you do before your meets?

EK: “One of the routines that the team does before a race is the NAXC cheer. It sounds like it wouldn’t do much, a group of girls cheering and jumping right before a race, but it really gets me hyped up. It is like a reminder of how awesome my teammates are and that they have got my back, no matter what. When I step up to the line, the cheer always gives me that extra push of adrenaline and I start the race out with a purpose.”

NAeye:   What is your favorite snack to eat before Meets?

EK: “I never like to eat before a race because I usually feel nervous and i’m not hungry, but I know that if I don’t eat, my race will suffer because of it. My favorite snack that I eat before a race though is probably a banana. It doesn’t fill me up too much and is easy to digest.”

NAeye:  What is your favorite thing to eat after you Meets?

EK: “The best thing to eat is something big and heavy. After a race, my body just wants to consume anything and everything, so coming home to a hot bowl of pasta is the best.”