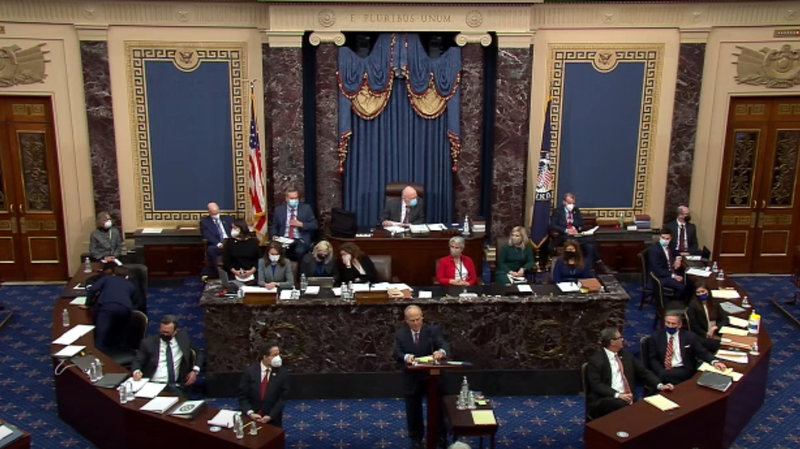 Congress tried and impeached Former President Donald Trump, but did not convict him

Former President Donald Trump was recently impeached for the second time, a feat never before accomplished in American history.  Many people believe that impeachment is unwarranted, however many others believe that he deserves it. apply for an online payday loan from Loans-Cash.Net

The Former President has been charged with inciting the insurrection that took place at the Capitol on Jan 6.   Earlier that day, he had held a rally where he told his supporters to march on the Capitol building.  Trump would not give up and realize that he lost the election fair and square. Instead, he would not stop talking about nonexistent voter fraud.  On Jan 6 when congress was counting the electoral votes, thousands of Trump supporters stormed the Capitol building.  We all know that if Trump told them to go home, they would have.  However, it took Trump too long after the insurrection had started to say anything in public.   When he did finally release a video of his statement, it did very little to help.  Although he did tell them to go home,  he encouraged their sentiments and restated the lies they were there fighting for.

In my opinion, Trump absolutely deserves to be impeached.  The insurrection that left several dead and many more injured was solely caused by the president not wanting to admit that he lost.  Trump should not be allowed to get away with this.

Many people who are against the impeachment said that it didn’t make sense to impeach him just days before a new president was sworn in.  However, these people belong to the same party that swore in a new supreme court judge just days before the election. The hypocrisy of the people that are against the impeachment is mind-boggling to me. The republican party has continuously criticized the Black Lives Matter movement for a few protests that turned to violence, however, they had nothing to say about members of their own party who stormed the U.S. Capitol building.

Thinking about the GOP’s reaction to Biden’s victory always makes me think back to 2016 when Trump won the election.  When Trump won, members of the democratic party held a peaceful protest in pink knitted hats.  When this happened, the republican party told people “facts don’t care about your feelings”.  This same group of people are the ones now storming the Capitol while Congress was in session because they thought they should’ve won the election.

Trump is the one who fed his supporters these lies.  He is wholly responsible for what took place on Jan 6. He knows that many of his supporters will listen to anything he says, and he took that chance of telling them to go to the Capitol. He incited a dangerous and deadly insurrection.

One of the many reasons Trump should be impeached is to set a precedent for the future.  This cannot be allowed to go unpunished. If Trump doesn’t face justice for this, America is saying that what happened at the Capitol on Jan 6th is okay.

Congress has dropped the impeachment case, so it looks like it isn’t going to happen.  The fact that they are allowing Trump to walk away from this unscathed disgusts me.  This should not be allowed to stand.  We will have to help our children study for tests about this, and when they ask what happened to Trump as punishment we will tell them that nothing happened. It is also worth noting that the vote to convict Trump was the most bipartisan congressional vote in history, with seven Republicans voting to convict.

The end goal of this impeachment trial was for Trump to face punishment for his crimes.  While him being imprisoned would stop him from ever messing with American democracy again, it was highly unlikely he would get any jail time, and even if he did he would certainly buy his way out of it.  However, a much more realistic and attainable goal was getting him barred from running for office.  Even though he will always be a pain, if the impeachment trial could’ve gotten him barred from running for office, then that is all he will be.  He won’t have the power to do anything like this again.

Many people think that Trump deserves to be impeached, including members of the NAI student body.  Sophomore Beck Thomson says that Trump deserves to be impeached because “His consistent incitement of violence hurt our country and democracy as a whole.” Sophomore Olivia Tourangeau says that “The former president committed multiple serious crimes, inciting insurrection being the big one, if that’s not an impeachable offense I don’t know what is.” Despite the fact that Congress dropped the impeachment case, many people believe that he should have faced justice for what he did.

Former President Donal Trump incited a deadly insurrection at our Capitol.  He absolutely deserves to be punished for this, but Congress, unfortunately, dropped the impeachment case.  The fact that this was allowed to go unpunished is ridiculous.