Brood X cicadas are emerging after being underground since 2004. Why is this happening, and what will it mean for us? Content warning: pictures of bugs. 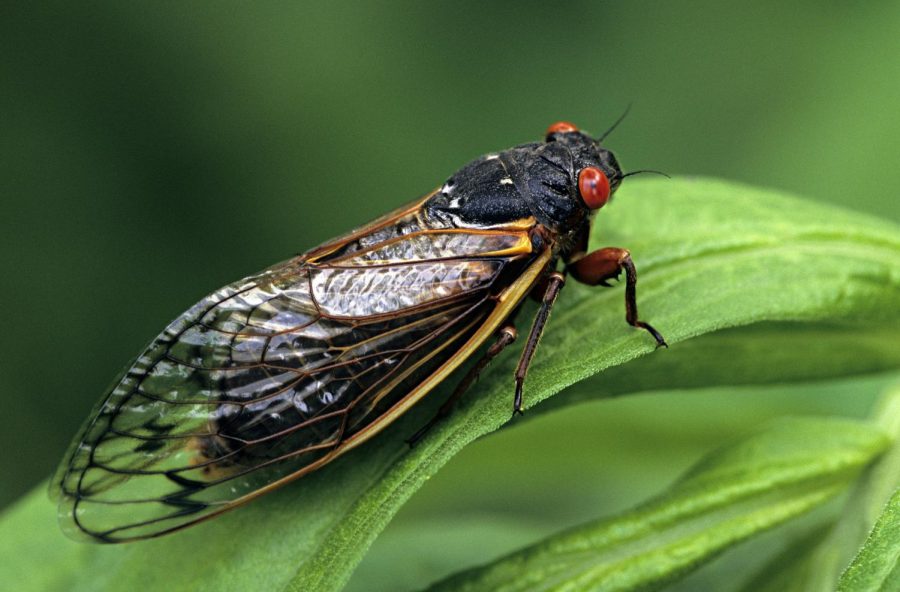 The end of the school year is near, and the excitement can be felt across the building. Everyone is ready to sleep past noon, go to exciting campfires, and lounge luxuriously by the pool. Summer is truly a time to be alive… including for cicadas.

Cicadas are insects that are about two inches in length and they have a hard exoskeleton and large wings. The main way to classify cicadas is based on how frequently they emerge.

The two most common classifications are annual cicadas and periodical cicadas.

Annual cicadas emerge from the ground, where they grow and feed off of roots, every year. They tend to be larger than periodic cicadas and they have dark green to black bodies and green-veined wings. Periodical cicadas, on the other hand, emerge after either 13 or 17 years underground. They are typically smaller and have red eyes, black bodies, and red- or orange-veined wings and legs.

For 17 years now, the periodical cicadas classified as Brood X (pronounced “ten”) have been underground feeding themselves through the nutrient-rich xylem from the roots of trees and shrubs. The life cycle of cicadas starts coming to a close during the springtime of their final year of life, when the cicadas will burrow tunnels to the surface of the soil. When the temperature reaches 64° Fahrenheit, the cicadas will emerge from the soil and quickly head to the nearest tall object. They will live for two to four weeks from that point and will spend the rest of their lifetimes mating and laying eggs.

The mass-emergence of Brood X already began occurring in May in some states and will continue through June. Some experts believe that in some small areas, cicada concentrations may reach one trillion insects per square mile.

With this many cicadas, their symphony will be unavoidable in the states expected to be crowded with the cicadas, including Tennessee, Maryland, Virginia, and Pennsylvania. Male cicadas have tymbals, which is an organ found in the insect’s abdomen. The tymbals make vibrations when pulled by small muscles, and the sound is then loudened by the male cicada’s mostly hollow abdomen. The cicadas’ music can reach 100 dB, louder than a lawnmower, leaf blower, or motorcycle, making them among the loudest insects in the world.

Many are concerned about the possible negative effects of the cicadas. In terms of direct effects on humans, cicadas are harmless. They are not poisonous and do not bite sting. Questions have also been raised about what would happen if curious pets like dogs were to eat them. However, rest assured that dogs will be fine if they ingest small amounts.

Environmental concerns have also been common, but cicadas have a neutral, if not positive, effect on the environment. For starters, cicadas do not eat leaves and are therefore not likely to ruin gardens. Cicadas have also been questioned as being harmful to the roots of the trees and shrubs that they drink from underground, but in reality, this feeding does not harm the plants.

The one negative effect that cicadas can have on the environment is the damaging of young trees. When female cicadas emerge from the ground, they look for new growth on trees (the tips of the branches) in which they can lay their eggs in. While this is not harmful to older, established trees, it can be potentially deadly for young, newly planted trees.

However, cicadas have a very important role in fertilizing the soil. The numerous carcasses they leave under trees when they die acts as a great fertilizer. The tunnels that they dig underground help to aerate the soil as well. Because of this, cicadas have an overall positive or neutral effect on the environment.

Here in Pennsylvania, it is very likely that in the first month of summer there will be a symphony of cicadas and their exoskeletons will fill the sidewalks. Though they are big, noisy, and potentially frightening to squeamish people, keep in mind that these insects will not harm anyone and they are helpful to the environment.