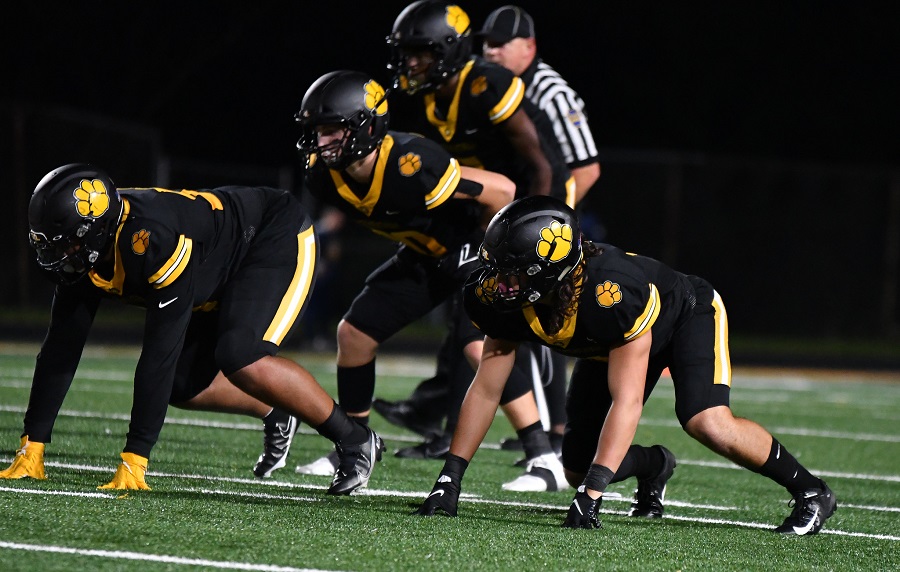 The Tigers' defense lines up against Central Catholic on Sept. 24.

Blackout at Newman Stadium means cheers and screaming as it was also Elementary/Band night on the field, but on Friday Sept. 24, the North Allegheny Tigers suffered an unfortunate loss of 24-7 to the Central Catholic Vikings.

They “fended off North Allegheny with its stingy defense and proficient running game”, Randy Gore, Broadcaster for NA Athletics, said as it was a disappointing defeat.

In the first quarter, Senior running back Gannon Carothers of Central Catholic scored a 3 yard touchdown that gave the visitors a 7-0 lead.

Carothers ran the field setting up a 3rd and goal when Sophomore Peyton Wehner scored a touchdown from the 2 yard line in the second quarter for a 14-0 advantage. 9:34 remained and no more points were scored in the first half.

Senior defensive lineman Donovan Hinish took down NA Sophomore quarterback Logan Kushner but the Vikings were guilty of a penalty for a “would-be sack by his facemask”. Kushner then tossed a 17-yard pass to Cole Dorn that gave NA a first down. Moments later, running back Kolin Dinkins ran a 62 yard touchdown for a score of 14-7 with 7:20 left in the second quarter.

The second half didn’t go as planned for the Tigers when Central’s kicker Matt Schearer scored a field goal to give them a 17-7 lead in the third quarter. Carothers then scored another touchdown in the fourth quarter with a run of 8 yards that ended the game 24-7.

The Tigers hope to dominate Mt. Lebanon this Friday to improve their overall ranking in the Quad County Conference.