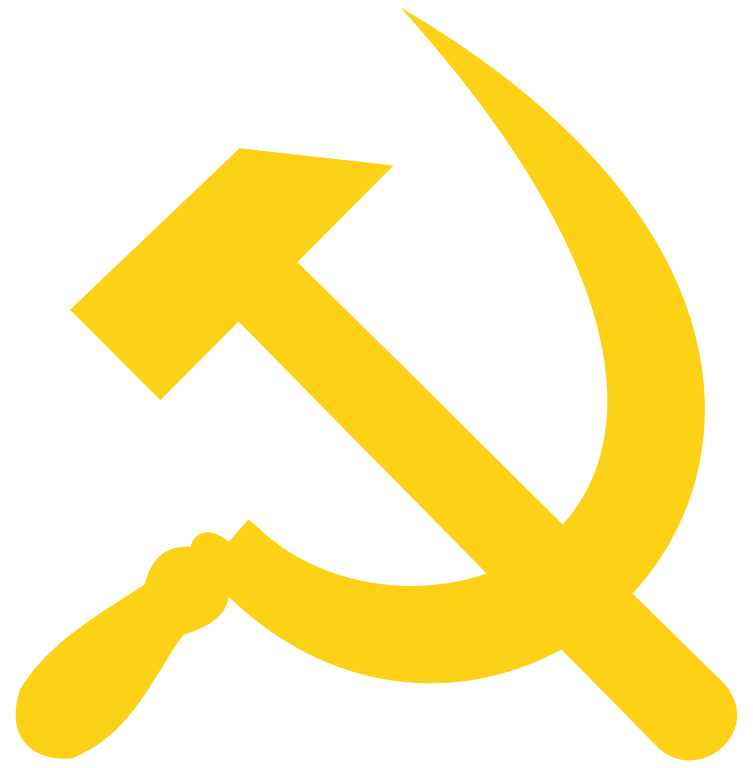 The Common Symbol for the Communist Ideology: A Hammer and Sickle

Introduction
Communism–the political ideology from hell. The greatest fear of liberal America. The evil political system that will inevitably lead to suffering…at least, that’s what many assume.

In recent years, many American politicians (particularly those of the political right) have started using the word “communism,” as a way to scare Americans away from any attempt at political reform that even slightly hints at some socialist policies.

For example, on April 3rd, 2020, the Minnesota DFL (Democratic-Farmer-Labor Party) reported on Republican senator Jennifer Carnahan’s allegations on Twitter that “Democrats have turned Coronavirus into an excuse for extreme communist control,’ due to social distancing measures implemented in the city of Minneapolis.”

The implication here is that if the government imposes any sort of restrictions on any matter…said decision suddenly equates to a communist agenda?

This tweet, and many other allegations made by politicians, really lead me to believe that there’s been a huge misconception on both what communism is, and what exactly it is that these politicians–and many citizens–fear.

When people hear the word communism, many will immediately turn to the idea of everyone’s paycheck being equal, and some oppressive, authoritarian government seizing control, and abolishing all the people’s human rights. That is missing the entire point of communism.

The True Purpose of Communism

Many people will gloss over the original works of Karl Marx and Friedrich Engels and only take away the ideas of abolishing private property, and maybe some anecdote on how the Bourgeoisie need to be overthrown by the Proletariat masses. However, a paragraph in the 18th section  Engels’s 1847 publication, Principles of Communism, reveals the true purpose of the ideology.

It states, “when all capital, all production, all exchange have been brought together in the hands of the nation, private property will disappear of its own accord, money will become superfluous, and production will so expand and man so change that society will be able to slough off whatever of its old economic habits may remain.”

The point of communism is not “equal paychecks,” or oppressive government control, but rather, to create an equal and prosperous society founded by the productivity of workers devoid of any destructive class divisions.

Marx’s and Engels’s original intentions behind the equal distribution of wealth was to motivate workers to work harder.

The harder the workers worked, the more would be produced. The more that is produced, the more goods and services are available for society. The more goods and services are available, the higher their profits–which would still remain equal–could become. Eventually, there would be such a surplus of goods, that they would lose all monetary value from sheer quantity alone. If someone needed something, they could just go get it.

The Theoretical Weaknesses
While a perfect paradise of equality obviously sounds incredible, there is a blatant weakness to this idea–human selfishness.

Just getting to this theoretical utopia would be difficult. There’s very little chance that all people would cooperate and give up some of their personal ambitions for the sake of absolute equality. Success stories of individuals would be replaced by celebrations of accomplishments made by a community working together, and as crazy as this sounds, many humans are not so willing to share such successes with others. They want to reap the rewards for themselves.

But even if humanity could reach a communist utopia, it’s unlikely it could actually hold itself steady. It’s important to note that while this theoretical utopia would have a great surplus of goods and services, the supply would not be infinite. It’s hard to imagine a world where people would only take what they need, or abide by a set number for how much they are allowed to take for the sake of everyone getting an equal share.

Historical Failures of “Communism”
However, despite the theoretical shortcomings, history would provide a different sort of downfall for the communist ideology. The greatest examples would have to be the Soviet Union and Maoist China.

During its early years, the Soviet Union harbored a reputation of being an oppressive authoritarian regime where the people lived in fear. Anyone who dared speak out against its leaders–whether that be Vladimir Lenin or Joseph Stalin–would be imprisoned, killed, or sent off to rot in work camps.

According to a 1989 publication by the New York Times, historian Roy Medvedev reported that under Stalin’s reign of terror, “20 million died in labor camps, forced collectivization, famine and executions.”

In China’s case, under Mao’s regime, the country’s population–to put it exceedingly lightly–suffered greatly. Through major miscalculations surrounding China’s food supply–created through lies that stemmed from competition between provinces–Mao took an overambitious leap to catch up with the West industrially. Certain projects like the Red Flag Canal took years of harsh human labor (and lives) to complete.

Additionally, an outrageous goal for mass steel production would help create one of the most terrible famines in human history. Farmers neglected their crops to create steel that would ultimately be worthless and unusable. This, in combination with a horrific drought, would create a massive food shortage which according to Tania Branigan–a journalist for The Guardian–claimed at least “36 million lives.”

This isn’t even considering the violent Cultural Revolution in China, or how tensions between the Soviet Union and the United States put the world on the brink of nuclear destruction. However, what is important to note is that these regimes labeled themselves as “communist.”

What America REALLY Fears
American politicians will often associate “communism” with the regimes of the USSR and Maoist China. New policies are constantly being rejected out of fear of becoming like–as previous US president Ronald Reagan would put it–one of the “evil empires.”

But when just a little bit of research and history is analyzed, it is easy to see that the old “communist” nations closely resembled authoritarian-styled political systems mixed with a socialist economic system more so than true communism.

It’s time that America finally recognizes the inaccuracy of throwing around the word “communist” to block out new changes. The whole point of communism was (and still is) a grand utopia of equality, not ruthless government domination or equal paychecks.

What the US fears is not communism, but the previously failed “communist” regimes. However, it was not communism (or even socialism) that failed those past regimes, but instead, the dictator-like leaders and government that forced the nations down a path that eventually led to failure.

Unfortunately, when politicians use the term “communism,” they are almost always referring to the disastrous nations of the past. This is what creates the misconception that communism (or even just socialism) automatically equates to authoritarianism, thus installing paranoia in the American public.

Nowadays, everyone fears that even the slightest sign of socialism will inevitably destroy the USA’s democracy, and replace it with authoritarianism similar to the fallen USSR. This cannot continue. America is changing, the world is changing, and the people at the top need to be able to take the steps necessary to adapt to said changes. The “communism” that politicians refer to is not communism by definition, and therefore, a hint of equal distribution or government regulation is not going to strip away all of the people’s freedoms.

The Future of Communism
Aside from stopping a petty excuse for preventing policy changes, ridding the fear of communism from US citizens (and the rest of the world), is important for another reason–the possible implementation of the ideology in the far, far, future.

I am in no way saying that the world should start a communist revolution and begin parading down the streets under Marx’s name at this very moment. No, quite the contrary, actually.

As previously stated, natural human tendencies prove that the world is definitely not ready for communism, and it will probably stay that way for a long, long time. However, the ideology should be kept in mind, and correctly taught for future generations.

Obviously, people should not be brainwashed into submission, but simply being able to make the distinction between the most important takeaways–a utopia of equal prosperity–and the failed attempts–the Soviet Union and Maoist China–is more than enough to keep the ideology from dying out completely.

Finally, it is critical to always keep the end goal at the forefront, and to recognize that the means to getting there do not have to strictly follow any previously established code. Marx’s and Engels’s original works have plenty of shortcomings, including a surprisingly vicious opposition against religious freedom–something that definitely did not, will not, and would not sit well in the past, present, and future worlds.

If communism is to one day be applied, the weaknesses of the current variants of the ideologies must be recognized, admitted, adjusted, and omitted if necessary. No ideology can be absolutely perfect on the first try, and if communism wants to succeed, then just like human nature, it needs to evolve and ascend.

One day–possibly a millennium or more down the line–the world may see an opportunity for a true communist utopia. If no better system is developed, the people will need to be able to recognize said opportunity and welcome it with open arms and without fear.