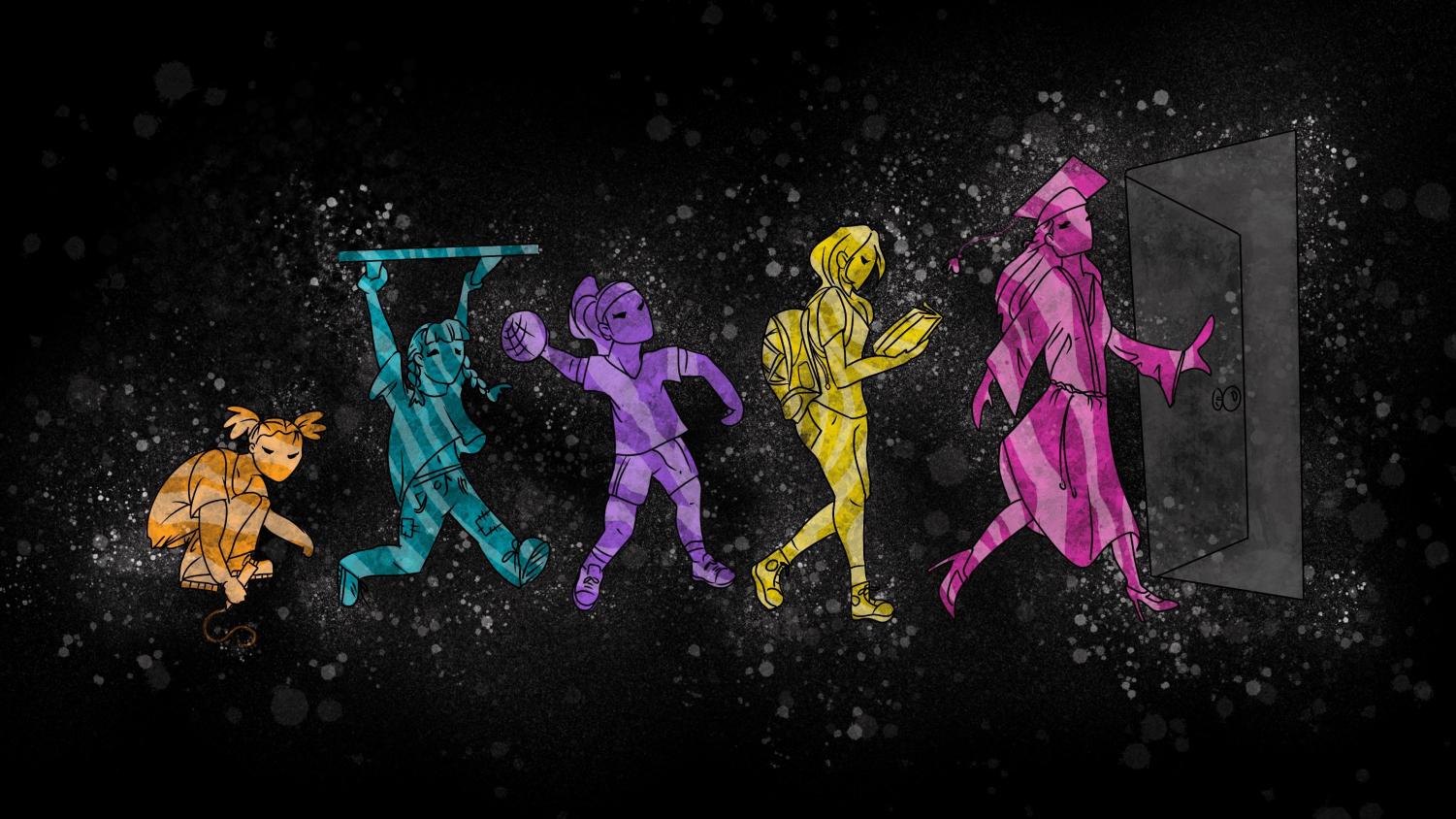 The collective evolution of an archetypal North Allegheny student-- from the playground to graduation. (Réka Götz)

The collective evolution of an archetypal North Allegheny student-- from the playground to graduation.

Born and Raised in Black and Gold

For our whole lives, we were always preparing for what was next-- high school. Now that we're here, we look back on the connections we've formed through the years and the exhilaration that the future still holds.

There’s something that’s kinda funny when you’re a sophomore in a school with kids you’ve pretty much known your whole life. It’s not necessarily a “ha-ha” kind of funny, but rather possesses a think-about-it sort of humor. Actually, it’s pretty weird, and may not be all that comforting. Here it is:

You know way too much about kids you don’t even really like. You have inside jokes about teachers and other trivial, random things with peers that may make you roll your eyes several times a day. No matter how distant the two of you are, you know something about them, and they know something about you.

It’s a consequence of being together for ten long years– or maybe it hasn’t even been that long. It can even be a result of sitting in the same chemistry class for a seemingly small two months.

More than anything, it’s because, whether we like it or not, most of us were all born and raised right here. In Pittsburgh. In North Allegheny.

But why does it suddenly matter now? Well, that’s simple. It matters because it’s almost over. No matter how far away graduation may seem, we’re all on this same last step together– high school. Even more, we all started on a very similar first step, too.

When we were in elementary school, we focused on Halloween and Christmas parties and Jump Rope for Heart and field days. We played castle ball in gym class and painted very similar art projects. Most of us stood on “the fence” at recess when we got in trouble and scraped our knees falling off the monkey bars. It’s a little chilling, actually, how most of our childhoods feel like exact prints and replicas of each other. We had something else in common, too. We were endlessly told we need to prepare for middle school.

Whether we like it or not, most of us were all born and raised right here.”

Then, we got to middle school, and it wasn’t too bad. We had Team Days and all studied ancient history and had the Greek Festival and went on shockingly similar field trips and read The Outsiders (which will always be one of the most iconic novels ever written). Again, all our teachers tirelessly preached that we need to get ready for high school because it certainly wouldn’t be so easy.

Well, we’re here now. It may not be easy, and we may all miss our time on the playground, but I like to think it’s not as horrifying as Mrs. Goodman convinced her whole sixth-grade class it was.

Here’s another thing, but don’t worry, this one’s actually a little reassuring. Now that we’re here, we’re all in the same boat.

To some degree, I’m convinced we’re all a little terrified in the most amazing way.

Maybe some are better at hiding it or experience it in different ways. Suddenly, we don’t have warnings about what’s next anymore. We don’t have teachers telling us about the next big kids’ school.

Because we are the big kids.

Sure, we still have NASH to cross off our lists, but regardless, we’re still in high school.

It doesn’t matter how you feel about college— if you’re scared to death or absolutely ecstatic. Personally, I’m the latter. Regardless, not having a sign telling you where to go is intimidating. Realizing that in a few years you’ll have to define yourself, as a human being and as an adult, is a downright daunting task.

Hey, maybe I’m wrong. That’s always an option, too. Maybe I’m completely making this all up and no one actually thinks any of this. But I refuse to admit that I’m all that different.

Because I simply can’t be. Because we were brought up the same way. We played the same games on the playground. We idolized the same stars on Disney Channel and all wanted the same toys. We all had our whole academic career at North Allegheny laid out in front of us since… well, since forever.

We were told what clubs to join and what games to play in gym class. We were recommended for courses. We had to follow requirements. We understood how things worked around here. We were sheltered in almost every way.

Now, we’re getting ready to be kicked out the front door, left on the street, shivering and clueless.

Tell me that’s not frightening.

Tell me that it’s also not the most exhilarating thing you’ve ever heard.

We’re all on our own verges-of-something, and you may not know it yet, but I guarantee that it’s there.

What’s the point of me saying that? I’m not sure. Maybe it’s just to acknowledge that we’re all a crazy mix of anxious and happy and petrified and alarmed. It’s just one more thing we have in common.

You could say it’s the final chapter in a typical NA childhood. A childhood that began with football games and Silly Bands and playing Wii Sports and ice skating at North Park and the old movie theatre that now is only used as a parking lot. One that ends with even more football games, some school dances, Snapchats, a bundle of tests, a few very long essays, and lots of chaos.

Now, we’re almost at the point where we have to discover who we are, who we want to become, and what we want to do.”

We’re just starting the last lap of the race— the lap where your lungs feel like they’re collapsing and your legs are on fire. It’s the lap that hurts the most. But it’s also the lap with the biggest reward at the finish line.

Who knows? Maybe we’ll actually be sad when it’s over.

It’s odd how so many different kinds of kids can have the same starts, the same timelines, and the same endings for the first eighteen years of their life. It’s weird how the other seven hundred kids in my grade and I probably have a lot more in common than we ever would have thought.

I think, somehow, it links us all together. Even the kids you don’t particularly like. Even kids you don’t know. I’m not saying there’s anymore more to it than that. Trust me, I don’t want to be in some kind of metaphorical family with an annoying kid I barely know.

But what can I say? In a way, I do know them. They know me. After all, I guess we grew up together.