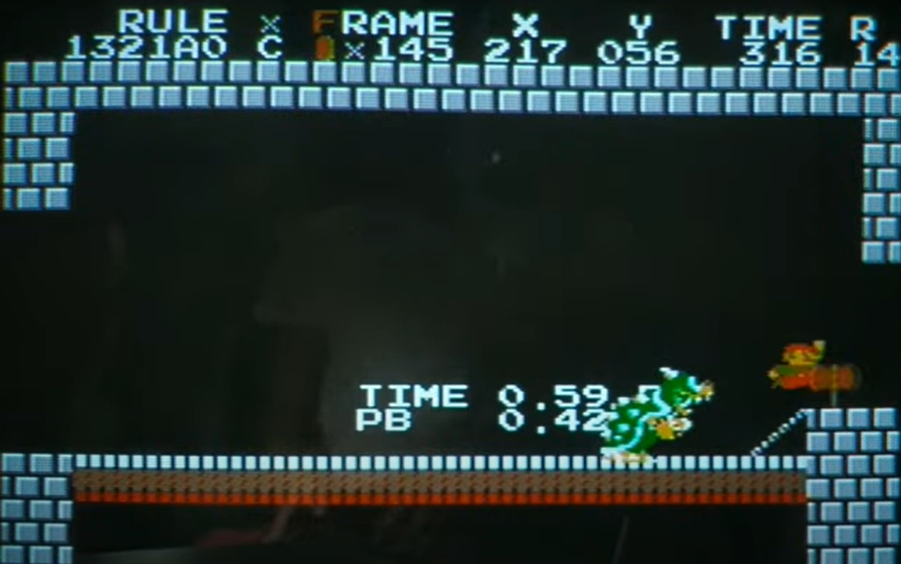 On February 28th, 2022, Super Mario Bros. speedrunner Lekukie broke the last barrier between humans and the TAS (tool-assisted speedrun) by saving the last possible frame of time in the original Super Mario Bros (SMB1) on the final level of the game–8-4.

The story of the journey that led all the way up to speedrunners–players who try to complete video games or tasks in video games as fast as possible–tying the TAS for the entire game is intricate and compelling, but also one that has already been mostly (and expertly) documented by YouTuber, Summoning Salt in his video, Super Mario Bros: The Human Limit.

However, the journey would not be completed for another ten months, as 8-4 would continue to elude the SMB1 community. To understand LeKukie’s specific achievement requires an analysis of both 8-4 itself, and the evolution of the level for speedrunners over the years.

The Foundations and the Framerule System

8-4 is the final level of the game, and just so happens to be a maze level. In order to progress, the player must take the correct pipes in order to advance to the next room. But most importantly of all, it’s the only level in the game that does not fall under the infamous framerule system.

Super Mario. Bros speedrunning basically revolves around the game’s unique way of checking for level completion–the Framerule System. Essentially, the game only checks if a player has completed a level every 21 frames instead of every frame. For speedrunners, this means that levels don’t have to be played perfectly down to the frame, but rather, just fast enough to reach the quickest 21-frame interval (or framerule).

However, 8-4 does not abide by the Framerule System, since timing for the speedrun stops as soon as Mario touches the ax at the end of the level. This is what separated humans from the TAS. While every other individual level (IL) would eventually match the TAS, 8-4 remained just out of reach for years.

In the early age of speedrunning, the quickest human speedruns simply involved getting to each appropriate pipe while slowing down as little as possible. There were a few known glitches that could have easily brought the time down, but at the time, the main speedrunning hub was an organization known as Twin Galaxies, who strictly banned the use of any and all glitches. However, one man would change that in 2007: Andrew Gardikis.

Gardikis, better known as AndrewG, decided to go against the ruleset of Twin Galaxies, and recorded a full game speedrun with glitches on April 14th, 2007. While this run is most well known for the discovery of the 4-2 wrong warp, the revolutions in 8-4 can not be understated.

AndrewG’s speedrun just so happened to also contain the fastest 8-4 at the time it was achieved, implementing two major glitches–a second wrong warp, and a wall jump.

The wrong warp works similarly to 4-2, where the player confuses the game into loading a different room for pipe entry by scrolling the screen far enough. (The room a pipe will warp the player into depends entirely on the screen’s position.) Any pipe entered after that point will end up loading said “wrong” screen. This is done in the third room (now referred to as the turnaround room), where the player intentionally turns around after scrolling the screen far enough for the wrong warp to work, and enters the “wrong” pipe to load the next appropriate room.

The wall jump is a simplistic in concept, yet difficult in execution. It is a maneuver that involves landing pixel-perfectly between the section of two blocks, and jumping frame perfectly in order to achieve a jump off the wall–hence the name, the wall jump. In 8-4, it is used to get into the pipe (which is actually made of two blocks despite what the visuals suggest) that leads to the third room faster. These glitches would become staples in every fast 8-4 speedrun for years to come.

Eventually, as other players entered the SMB1 arena, 8-4 started to become more appealing as an IL speedrun. The early pioneer for 8-4 IL speedrunning was Kosmic, a speedrunner who’s still around today (though not quite as active on SMB1 specifically). The most important factor he brought to the table was the use of Fast Accelerations.

On the surface, fast accelerations seem like just a quick backwards jump that instantly accelerates Mario to running speed. However, in order to get to said running speed, a series of frame perfect inputs have to be performed, which were extremely difficult.

Over the years, it would be this technique that would become many players’ achilles’ heel. Some players already struggled with the wall jump, which only contained a single frame perfect jump. Doing a series of such precise inputs seemed terrifyingly difficult. Shockingly enough, Kosmic was already implementing multiple fast accelerations in his 8-4 IL runs, so it was daunting to even think about adding more.

Taven Webb made a massive breakthrough on January 13th, 2019, becoming the first person to perform a double fast acceleration in a full level run of 8-4, doing so in the turnaround room. While this challenge would intimidate many other runners for a long time, Taven Webb only continued to improve. But after being champion of 8-4 for many months, other players came on the scene to challenge Taven Webb, and on May 7th, 2020, it would be Kriller37 who would become the first to tie Taven Webb.

Following Kriller37’s tied record would be three years of some of the most incredible competition in not only the history of SMB1, but arguably for speedrunning’s history as a whole. However, the highlight was 8-4, where players would start to make a rapid flurry of improvements through the addition of  trickier fast accelerations. World records would be frequently tied and toppled, new strategies would constantly be utilized and shared, and the community as a whole would flourish tremendously. Many notable names included Niftski, Miniland, Thelxinoe, and of course, LeKukie.

LeKukie uploaded his first 8-4 IL speedrun on October 6th, 2019. From there on out, his skill was obvious, and by August 30th, 2020, he managed to tie the world record at the time. Throughout the rest of the year, and much of 2021, LeKukie and all the other speedrunners continued to push 8-4 further and further. By April 22nd, 2021–not even three months after the final framerule was saved in 4-2–LeKukie achieved his first untied world record run, and the gap between humans and the TAS was a measly two frames.

The first of the two frames was saved by LeKukie on August 14th of that same year, along with both Niftski and tree_05 later on down the road. But the final frame–a falling fast acceleration in the first room–would prove to be a challenge, as even LeKukie himself stated that he didn’t know “how the community would handle that frame as a timesave since [it was] so hard to figure out.” However, as history would prove time and time again, perfection would not escape the grasp of a speedrunner.

On February 28th 2022, the journey was over. LeKukie achieved the perfect 8-4, and humans had matched the TAS in every individual level of the game. The significance of this achievement cannot be understated. Speedrunning has gifted some of the most talented players and accomplishments, but rarely is a game so incredibly optimized by players of such a high skill set that the humans playing it can match a computer…so it came as quite a shock when a SECOND player managed to tie LeKukie’s world record.

On March 16th, 2022, Niftski became the second single person to not only complete a perfect 8-4, but also to have completed every individual level of the any% speedrun perfectly. There are now two people who have one hundred percent proven their capability of tying the TAS on every IL down to the frame. This is extremely exciting, as there is still a known barrier that SMB1 speedrunners have yet to overcome: a full any% speedrun that matches the TAS.

Right now, the world record run, performed by Niftski, clocks in at 4:54.881. However, the TAS, created by Maru, is currently at 4:54.265–or, 4:57.54 because of timing differences between the TAS and human rulesets. (Note: There is a slightly faster version by HappyLee at 4:54.032, but that requires the inputs of left and right at the same time; a technique that is both banned and impossible to perform in real time runs.)

The separation comes from the faster framerule in 4-2 that has yet to be implemented in a world record speedrun (although it has been performed in a speedrun by Niftski), and the fact that the 8-4 in Niftski’s 4:54.881 was still several frames slower than the IL world record. Every last frame has been saved, now all that’s left to do is to chain it all together. 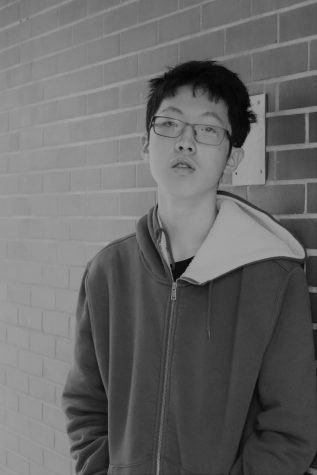 Sunny is a sophomore student at NAI who has just joined the school newspaper in the 2021-2022 school year. During free hours (which are unfortunately dwindling...