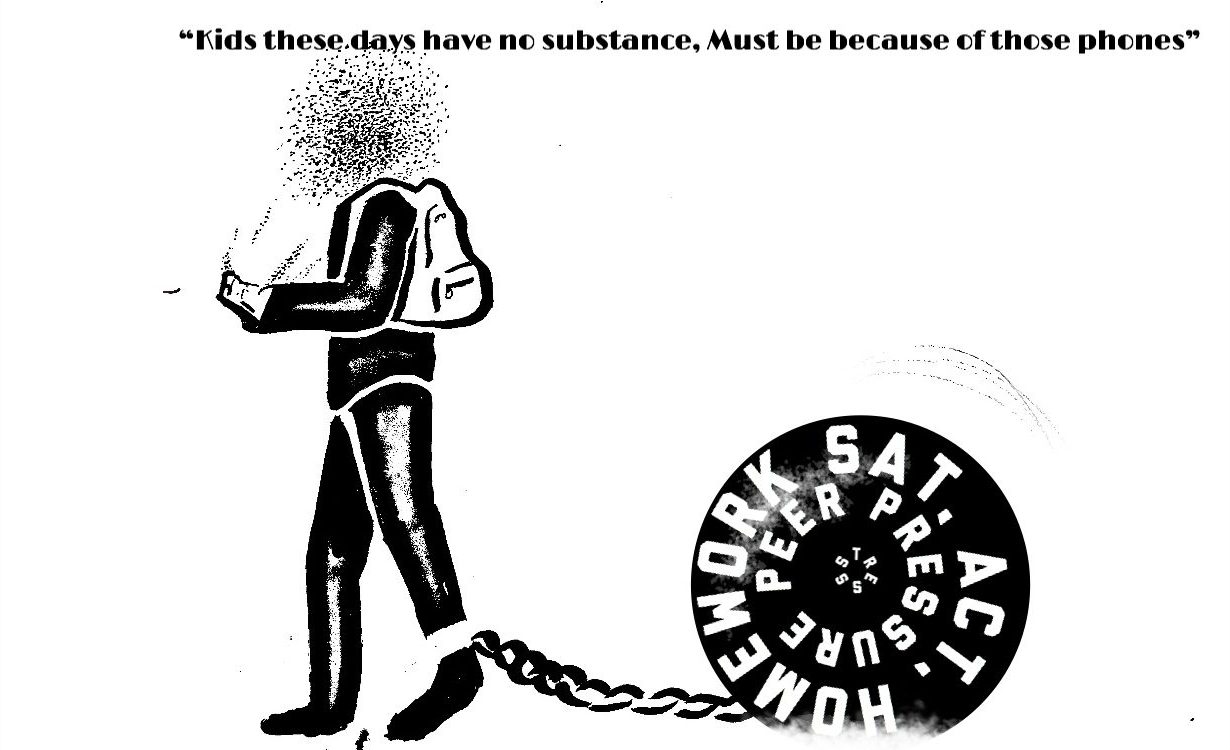 The woes of the new generation, often suffocated by the ones of the past.

Fact: When a sentence starts with “When I was your age…” the average student is about to receive a *minimum* 15-minute tirade on the flaws of current generations and how the “old days” were the “golden ones”. Rest assured you will soon find out the solution to your phone addiction, usually ending with a prescription ordering you, a technology-infected child, to go outside and talk to someone other than “Siri”, or whatever that rotten voice in your new-fangled smartphone calls itself.

Somehow, the source of all of our society’s problems seem to stem from technology, and not stress piled on by parents and extracurriculars including school, sports, job, and many more. Luckily, there’s an easy remedy: just relax, go outside with your friend, and please, stop drinking those Kickstarts (they’re filled with chemicals!)

Sorry, but something about that doesn’t sound quite right.

The fact is, about 57% of students are involved in at least one afterschool activity, whether it be a sport, club, job, volunteering, or anything else (U.S. Census Bureau, 2014). Kids these days are faced with loads of pressure from the adults in their life, but the worst pressure is put on by themselves.

Here’s the thing: it’s the 21st century, and it’s officially time to cast aside the stereotypical mold that every student is apparently subject to. Nowadays, kids feel the same amount of pressure that parents did when they were growing up, just in different ways. Sure, maybe parents and grandparents walked uphill both ways to school, and now kids are in the lap of luxury, riding yellow limos with heating and cooling. But kids also have to focus on the rising standards for getting into college, which teachers seem to be prematurely preparing us for.

In elementary school, it was, “You’ll do this in middle school, so we might as well start now.” In middle school, it was the same thing, except maybe with a few more zits and voice cracks trucking you like nobody’s business. Again, in high school, we hear the same monologue, but this time it’s the big one: college. While preparing students for what is to come is a great teaching strategy, it often pushes us to our very limits and brings things we may not be ready for to light.

When will this end?!

We have been preparing ourselves for what is to come, stressing ourselves to the point of illnesses caused by stress, staying up way past our transparent bedtimes… for what? To be the best? To prove something? According to NPR, almost 40% of parents say that their student suffers from some kind of school stress, leading to changes in behavior and actions.

Newsflash! We don’t need to memorize everything anymore, because unlike for our parents, we will have a calculator on us at all times, and we will have a periodic table easily found in a few searches.

Aside from the changing education techniques of today, students are also faced with several other pressure points.

In our increasingly competitive world, students have been faced with the ultimatum that to succeed, their portfolio must be bursting from the seams. That’s when extracurriculars come into play. Whether they are nudged into them by parents, or themselves, students begin to pour time and effort into these clubs, sports, etc.

Surrounding students in an extracurricular-forward environment can often form the mindset that kids are not doing enough. This can lead to unnecessary stress that builds up and forces kids to join groups and clubs that may not be the right fit for them. Although extracurriculars bring much-needed skills to the table, the overload of them forces other students to try and keep up.

So, maybe kids don’t have to milk their own cow every morning in order to get milk for the cereal made from the grains reaped in their backyard. But they also are not getting college scholarships or even admission handed to them on a silver platter.

Times are changing, and so are our difficulties. Kids “back in the day” didn’t always express their problems and emotions as much as people do today, but that does not mean that those problems did not exist. It could benefit our society if everyone took a step back and reevaluated our standards. The big picture is that no one is perfect, but everyone has an almost archetypal image that they want for themselves. Instead of putting unnecessary pressure on each other and ourselves, we, as a society, need to accept that perfection does not come with a set recipe.