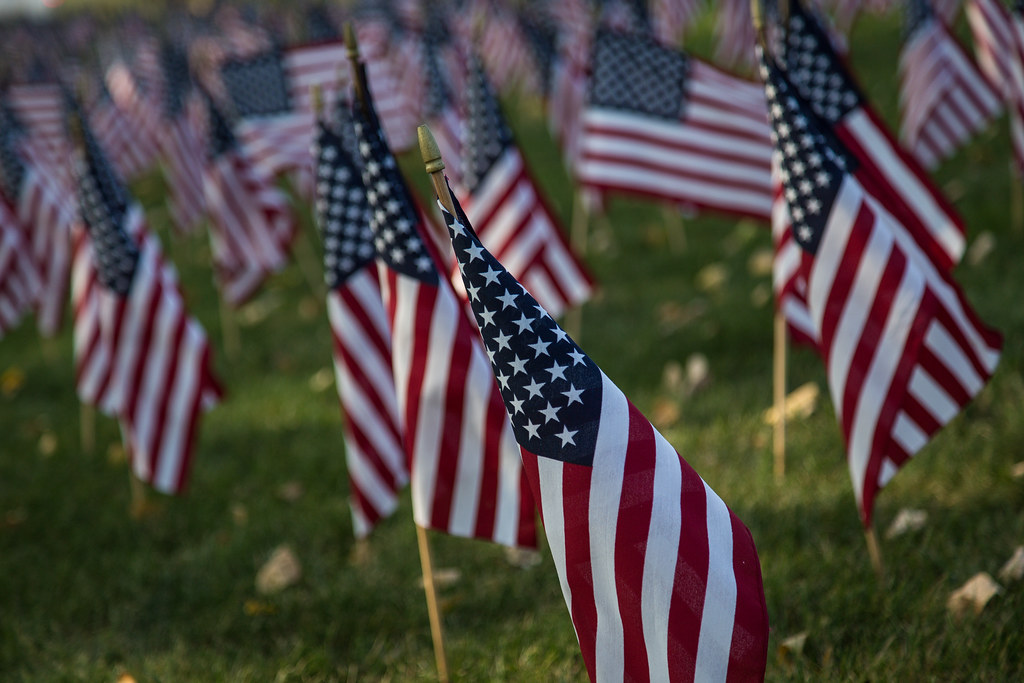 Not a single student at NAI was alive during the terrorist attacks on 9/11/01. So, we ask our best sources: what are your memories of that woeful day?

9/11 is a day in history that no one has and will never forget. It marked a new generation and changed the world forever. The day not only brought devastation all around the country, but it also helped bring the country closer than ever. Many people have different memories of 9/11, but everybody remembers the fear and grief they felt that day. Teachers around NAI describe where they were and what they were doing on this heartbreaking day. In fact, some of the teachers’ accounts were where you are sitting right now. 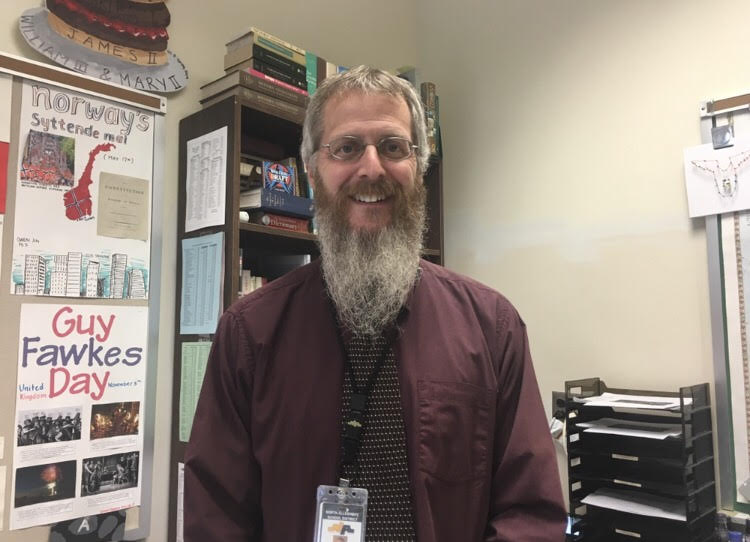 Mr. Winschel: “So, the attacks on 9/11 were in the morning in 2001. At that time, I was teaching half time just in the afternoons at Marshall Middle school, so when the attacks occurred, I wasn’t even aware because I don’t watch tv, and that was the media through getting information like that. So, I found out about it when I was driving on my way late morning at Marshall Middle School, and on Interstate 79, I was listening to “Talk” radio and heard about these attacks. At that point, I didn’t think too many people were listening to talk radio. I thought maybe I was the only one who knew this was going on. Little did I know that everyone in the country was riveted by this whole affair. And so, I go up to Marshall Middle school, and the school was trying to figure out the policy on how they would handle this. As I recall, I was to not address it and they didn’t want to worry the kids because a lot of the kids had parents working in the airlines and were having to travel, and they didn’t want the kids to think one of their parents might have gotten hurt or had casualties from these attacks. And so, it was strange, with this massive, MASSIVE piece of information and not being able to even speak of it and so, we went through the day that way. Again, at that point, not everything was on the computer so it was more like a TV or radio you got your information from, so I didn’t get the full impact until I got home that evening. And it was my birthday, so we had celebrated it and, I turned 28 that day and had a little birthday party on the back deck.” 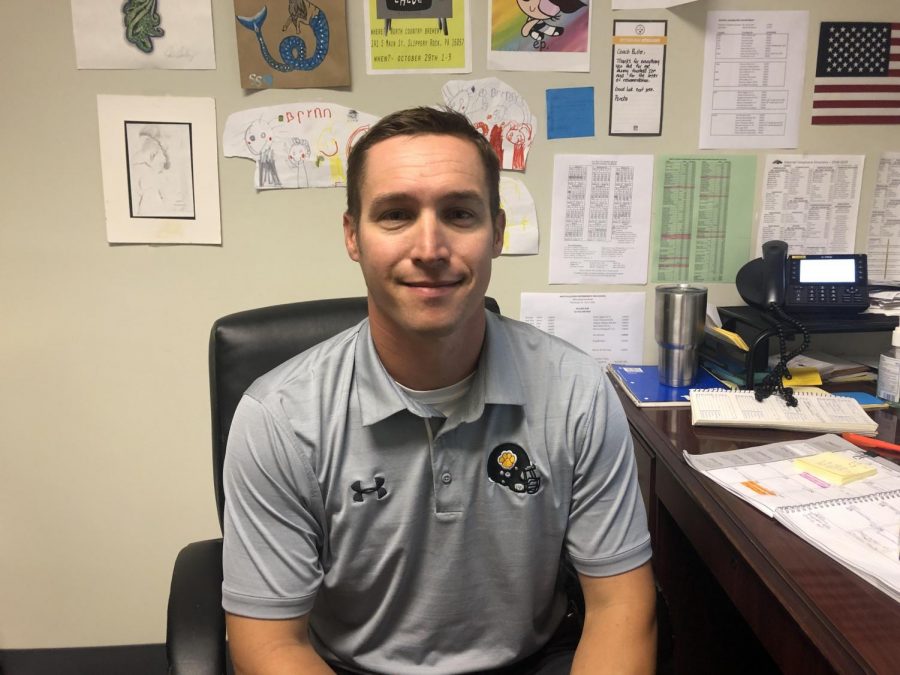 Mr. Butler: “So, I was in my 11th-grade math class at NASH. I don’t remember much other than it wasn’t on the tv, but I think after math class everybody started talking about it. In my next period class, we turned on the TV and watched it for hours.” 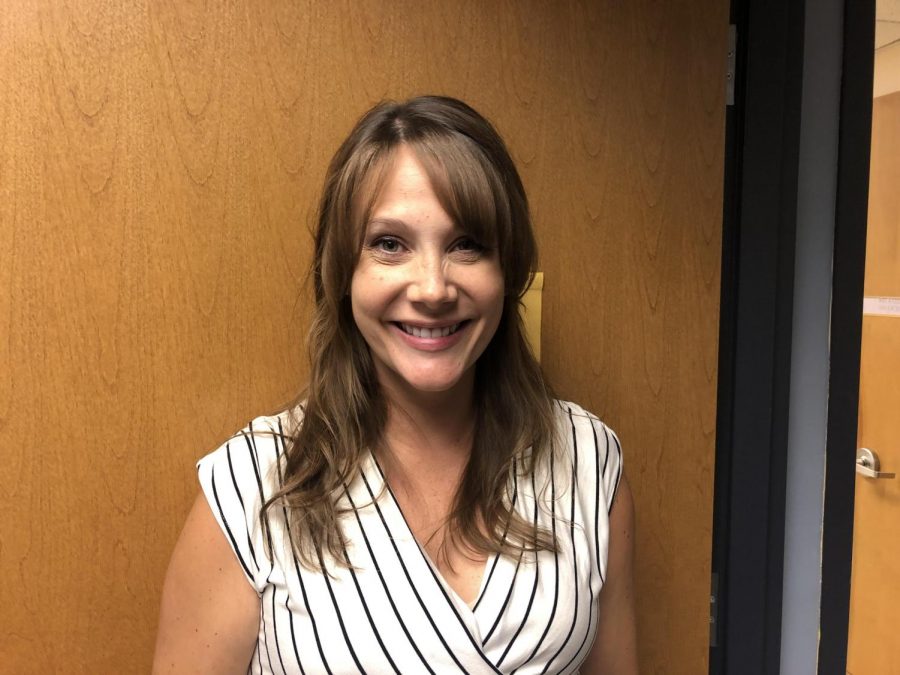 Mrs. Whitfield: “I was in the 9 grade when 9/11 happened. We had a substitute that year, and she was really awesome. The feeling of the whole day was really sad, but I felt more scared than anything. We didn’t really know what the twin towers were or why they were so significant. I remember people not letting us watch television, and it was really hard to comprehend in the first place. Not being able to watch television or try to figure out what was going on was hard. When I got home from school that day, my brother, who was in seventh grade, and me got locked out of the house. We went to the neighbors house that day and watched the coverage. For the next couple of months, we were just scared, because we thought it was something that would happen all the time. I remember teachers crying and being really afraid of what I didn’t know.” 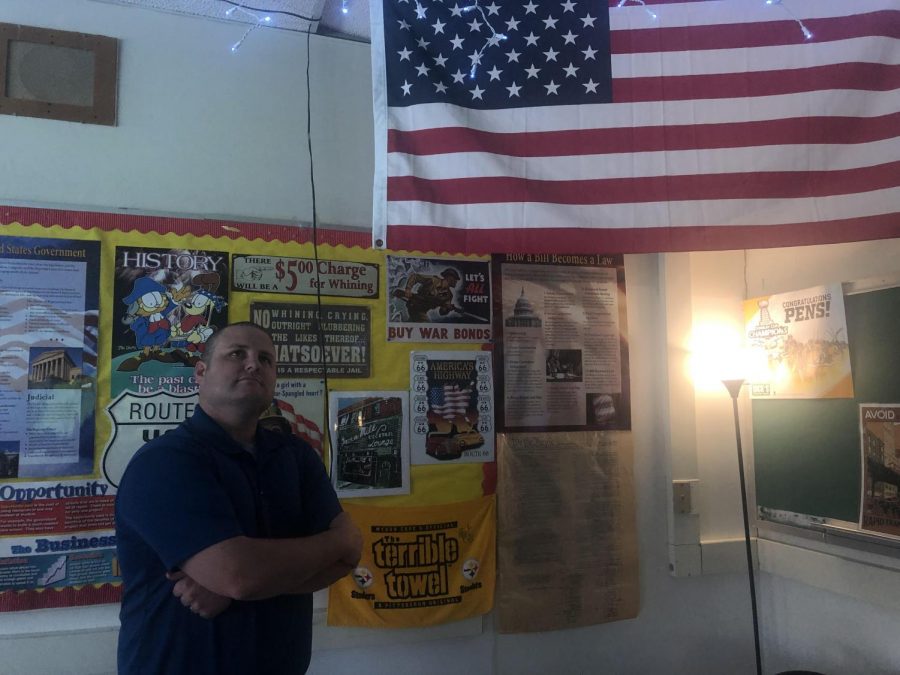 Mr. Lamm, “It was sophomore year of college, and it was a Tuesday. I was in the chapel of Grove City College. Before our speaker began, our Chaplin announced a plane had hit one of the twin towers and ask that the people of New York be kept in our thoughts and prayers. There were some snickers of laughter as people make comments like, the pilot didn’t see the building. I left and went right to my first morning class around 9:50am. Before class began, people were saying they heard that both buildings were hit, and a bomb went off at the pentagon. We were dismissive of that thinking and that it was just an exaggeration. I was walking back to my room around quarter after eleven. At this point, both of the planes had hit and both buildings have collapsed. I saw a bunch of people in my dorm room through the window, which was usual, and one of my buddies looked out the window and saw me. He yelled “hey Lamm get up here the twin towers are gone and they don’t exist anymore.” I ran up the steps, got to my room, and then they just played the replays. I got 9/11 in about five minutes. There was the first plane, the second plane, two buildings down, and a video at the Pentagon. The next couple of days, a lot of us who had cars were either loaning our cars to people or driving people to hospitals and what not to donate blood. You could not find an American flag anywhere. People were selling them on EBay for a lot of money, so we tried to buy American Flags to hang in our dorm rooms, windows. We tried to find a copy of the newspaper. Then the days afterward were a lot of fear from young twenty year old single men about are we going to have to sign up for the army, who did this, are we going to war?” 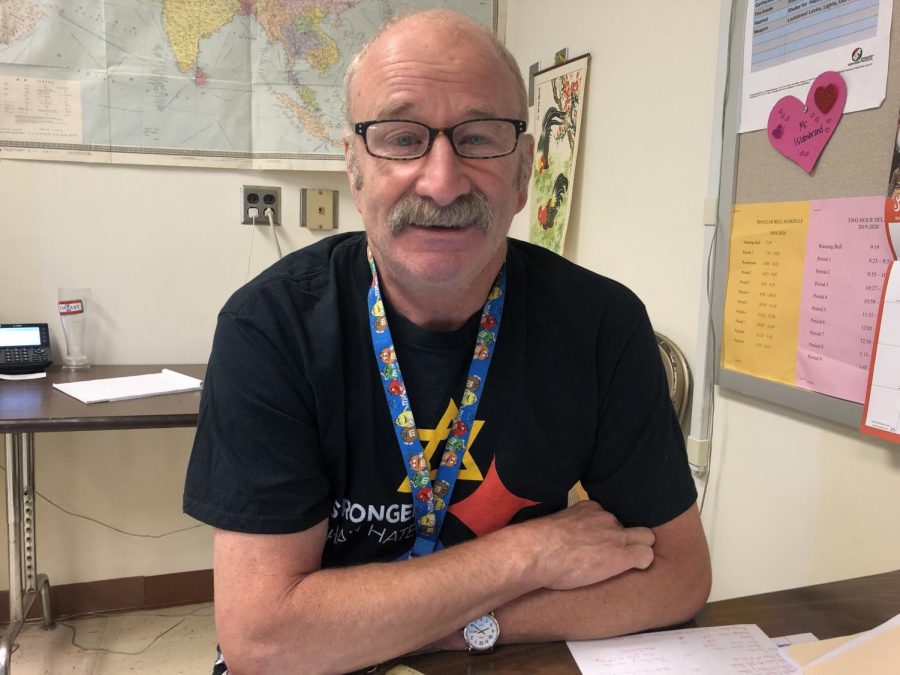 Mr. Hildenbrand: “I was walking down the hall with Mr. Deaugustino, and he’d said a plane had hit the World Trade Center. We both thought it was just an accident. We went into what is now my room, 402, where a teacher that has retired, Mr. Wilson, room was. We turned the news on and we saw all the planes. In my next class, we watched them burn and the second plane hit. By fourth period, we watched the towers start to go down. Everybody was completely devastated, and we sat around wondering how the world was going to be from now on. It was a pretty memorious day.” 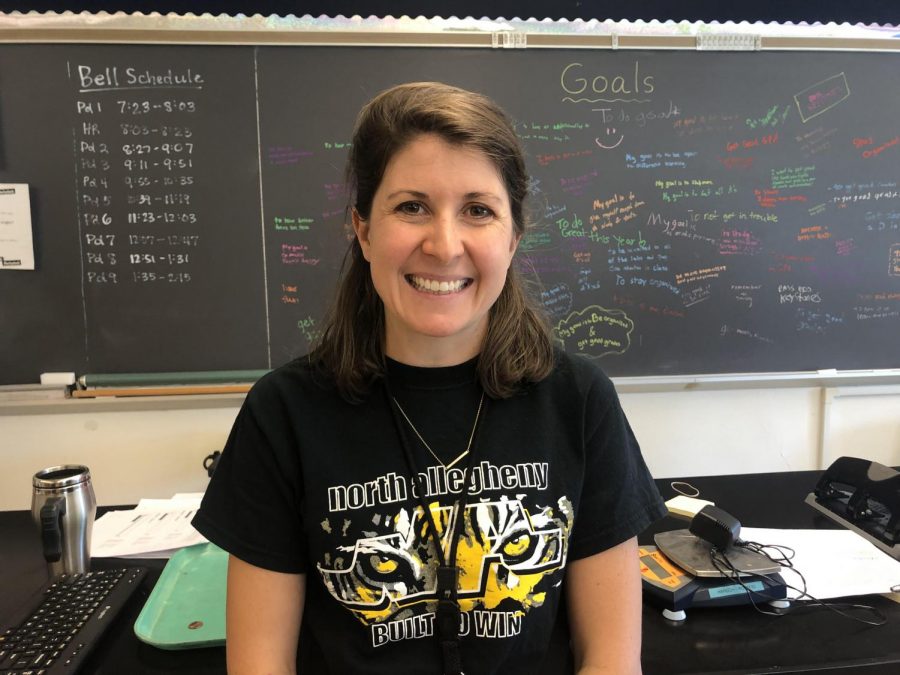 Dr. Morrow: “During 9/11, I was a ninth-grade student. I was sitting in my band class. I remember my band teacher coming in and saying something about an attack in New York. I didn’t really know what the world trade centers were at the time, so it wasn’t a picture that I could really make in my memory. The idea of something happening in the United States was really shocking. It was picture day. People were leaving early, because our parents were nervous. We were watching the coverage in most of the classes of what was happening. I remember being really scared, because it wasn’t something we had experienced before. I will always remember where I was that day, because it was really memorable.” 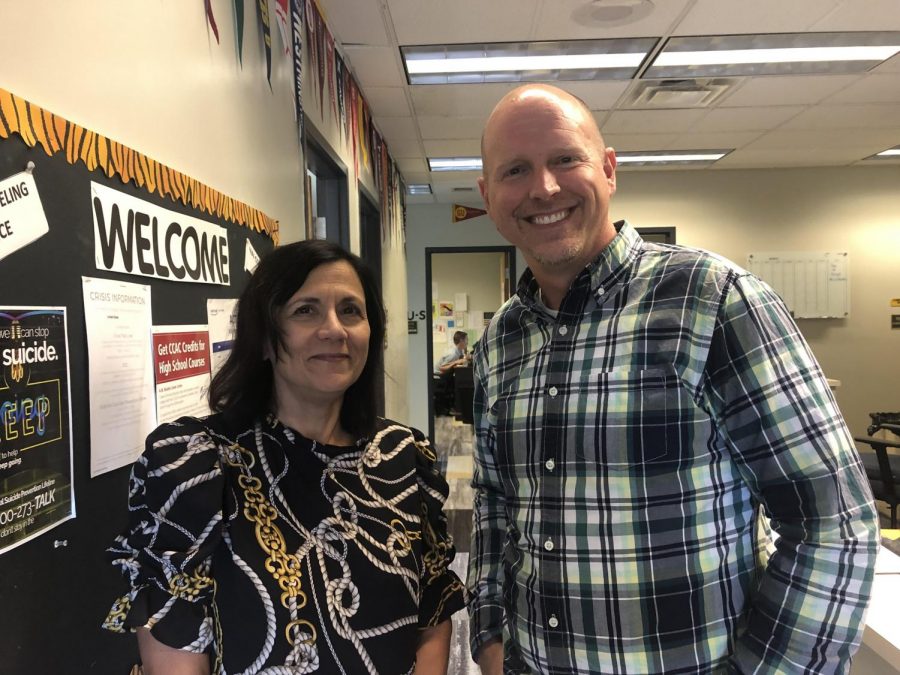 Kiggins: “It was my first year in this building, and I was in this office, and we all watched on TV in the back conference room, while monitoring any students coming in at that point.”

Mrs. Feliciani: “Yea, I was working, and I was over in the front office and heard there was a radio report.” 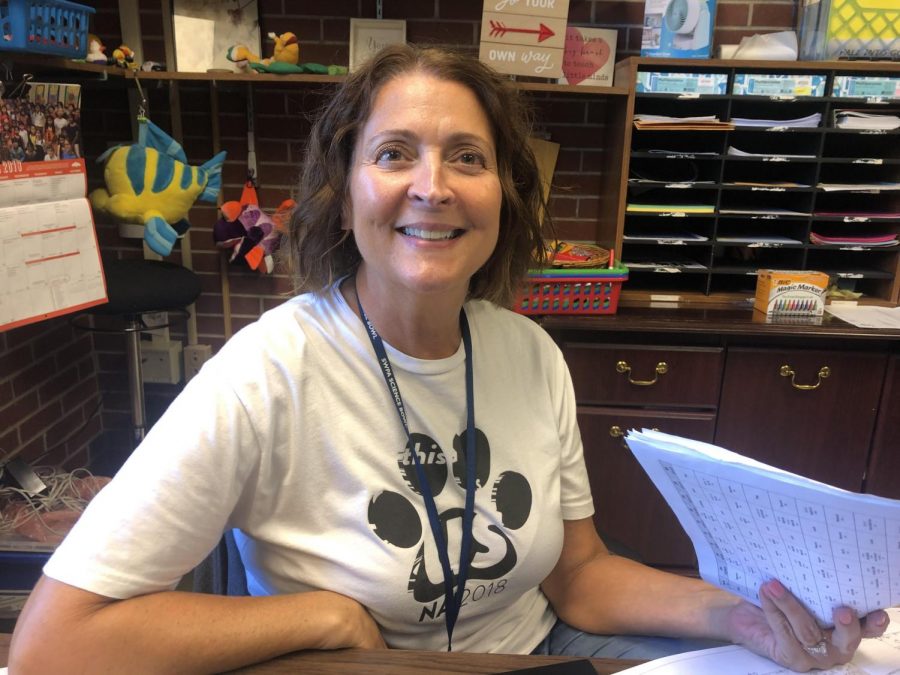 Mrs. Fochler: “I was in the biology classroom, and we were doing a lab on gravity.” 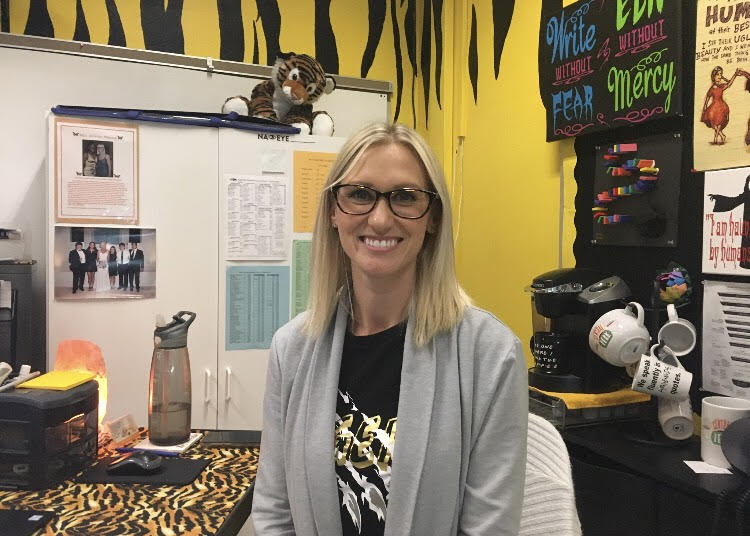 Mrs. Ferruchie: “I was a sophomore at Penn Trafford high school, and I don’t remember the period, but I remember it was in the morning and I was with the athletic trainer for our sports medicine class. We were actually folding towels when we heard it on the radio. We then turned the news on, then after that, I went to my choral class and we did not sing that day because we were just watching the news. Our principal, unfortunately, made a very poor decision and cut off the cable. So, we were not allowed to get internet access, and it was sort of like a media lockdown. Because of this, we were not able to figure out what was actually happening around us which was not a very good move on his part.

It was very surreal, serene; I remember it was one of my close friend’s birthday and so that put a damper on her birthday, but it was definitely a very scary situation and you feel sort of hopeless and helpless that you can’t do anything about it.” 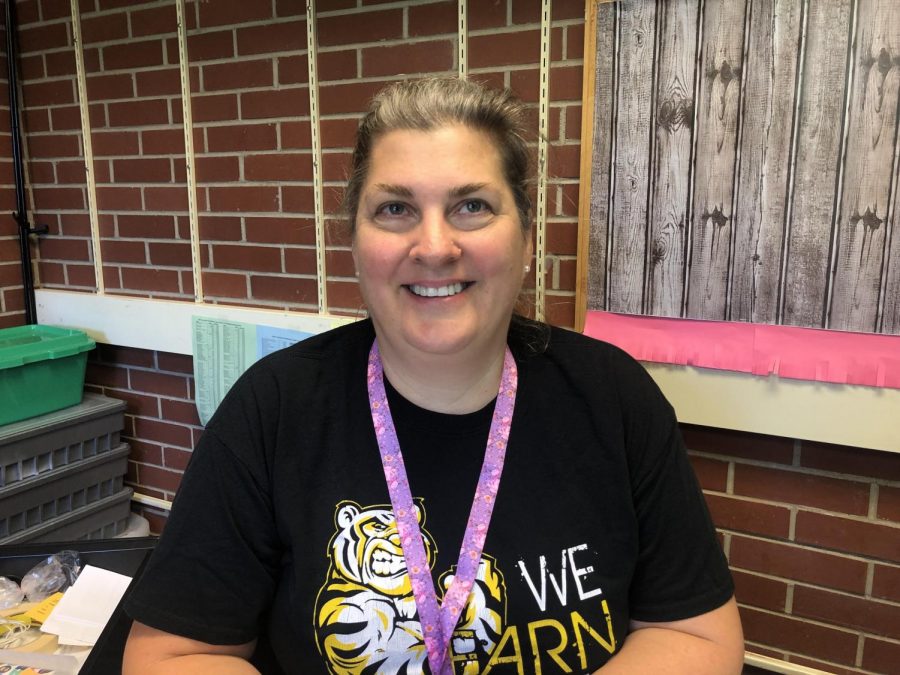 Mrs. Steel: “I was teaching at a catholic school in Baden, which is north of Sewickley. One of my children was at a babysitters, and one was at elementary school. My first thought was, where are my kids and how do I ensure they are safe. I was teaching at a school, and I was out on recess when I found out about it.” 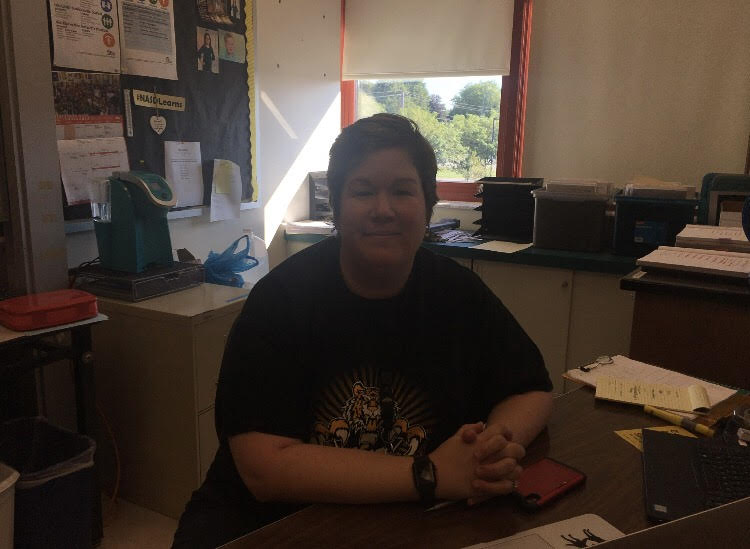 Dr. Gallo: “In 2001, I was at Penn State University and when the first plane hit the first tower I was actually in yoga class, which was my PE elective. So, I didn’t know it had happened because we were quietly sitting in our yoga class doing our yoga stuff. I then walked to my next class, which was my technical writing class, and when I walked in the tv was on and there was a picture. They were showing footage of the burning of the first tower. And I said ‘What happened?’ and somebody said ‘There’s a plane that crashed into the world trade center’ and I remember saying ‘On purpose?!’ because it horrified me that that had been the case. And they said ‘Yea’. So, we were sitting there watching the footage and the TV news we saw was broadcasting the second plane hitting the second tower in real-time, and it was horrific. We then sat there for a while longer, and the class never happened. The teacher came in, and we were all just sitting and watching tv. After sitting there for a long time, the first tower collapsed, and I then left and went back to my room to watch the second tower collapse.” 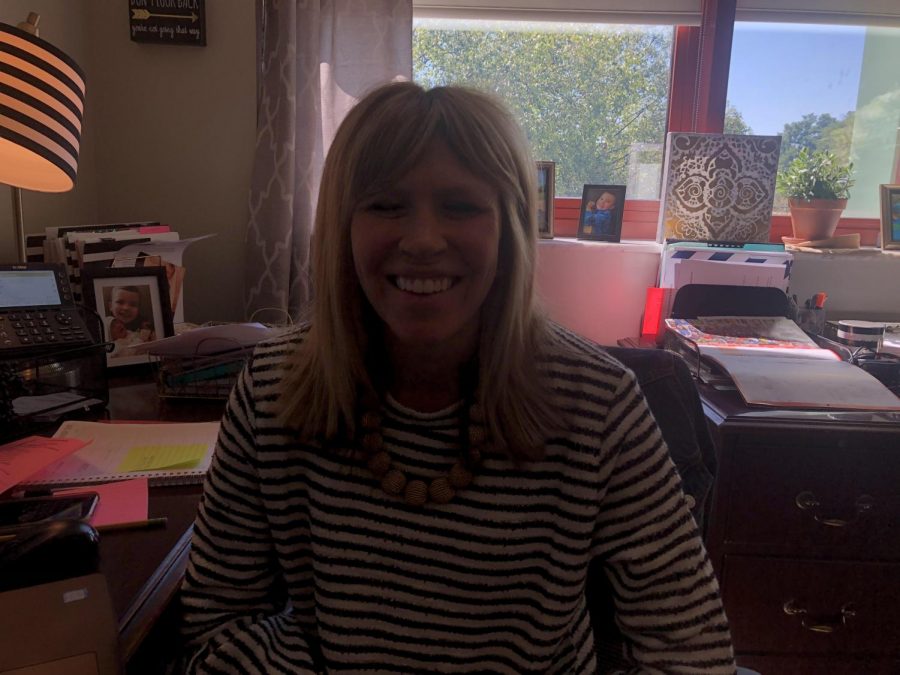 Mrs. Mayhew: “I was in 9th grade in high school. I’ll never forget, in the classroom, all the way over to the second row, by the door, we had heard something had occurred. So, the teacher at the time turned on the tv and we could see the live coverage and it was a little chaotic. I then continued with the rest of my day and a lot of parents came and picked up students and students left. Most of the TVs were on during the day, and we watched the second plane go into the building live. I just thought it was a rerun, but here it was: the second plane hitting the second tower. From there, pretty much our day continued. We went home that night, and I’ll never forget our neighborhood coming together and just enjoyed baking for each other.”

View Comments (2)
About the Writer 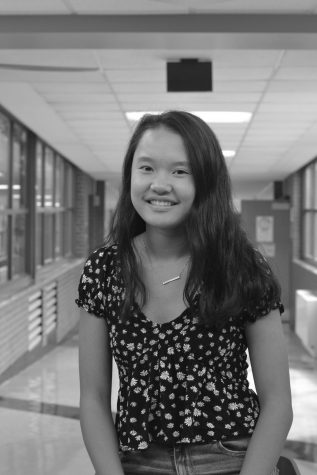 Chelsea Boyer is a sophomore at North Allegheny Intermediate and this is her first year as a staff writer for NAEye. During her free time, she likes to... 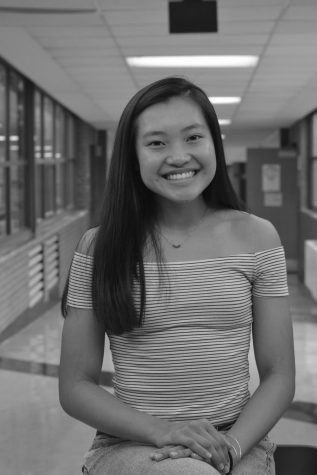 Lindey Glinoga is a sophomore at North Allegheny Intermediate and this is her first year as a staff writer for NAEye. During her downtime, she likes to...