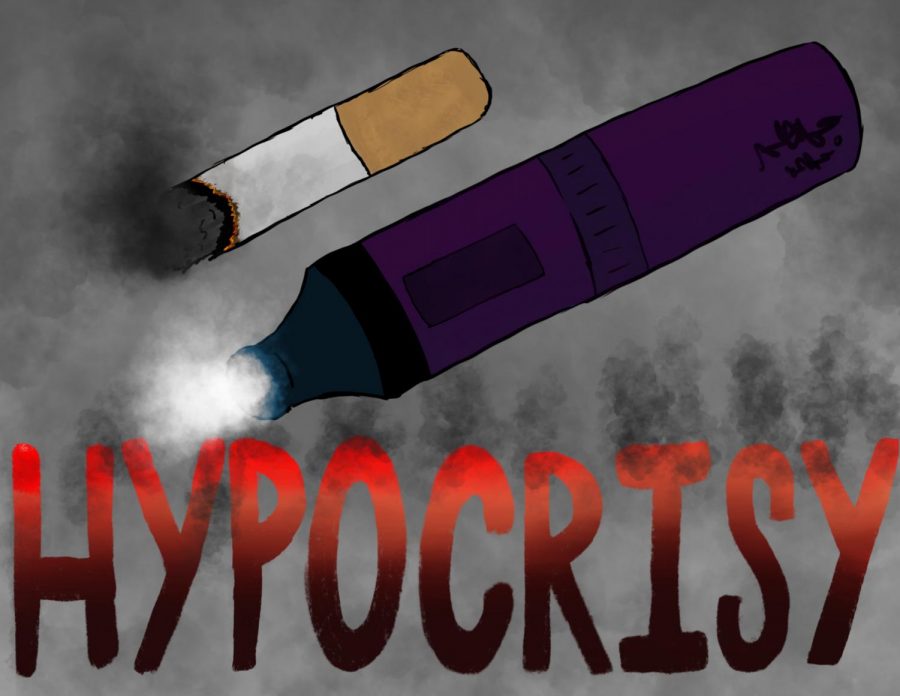 The Trump Administration exhibits hypocrisy when it comes to drug- related issues including vaping.

The Trump Administration has made a habit of using issues to benefit their own administration and contradicting themselves on a multitude of issues, especially vaping.

On September 11, Donald Trump announced a plan to ban flavored e-cigarettes because of recent reports of deaths and illnesses that were possibly caused by vaping.

Although this is relevant because rates of teen vaping continue to rise, those of us who are paying attention might raise the question: Why is this what we’re focusing on? Why are we not paying more attention to the issues that kill and affect the American people on a much larger level?

When we dive deeper into these questions, we may start to realize that the government seems to be hypocritical about a multitude of issues including racism, drug-related issues besides e-cigarettes, and guns. The focus on vaping seems to be a distraction to get us talking about something else besides the real issues.

Upon analysis of Trump’s statements and policies towards people of color, some believe that Trump is a racist despite him saying things like “there is not a racist bone in my body” and “I am the least racist person there is anywhere in the world.” Throughout Trump’s 2016 campaign trail for president, he frequently made statements saying that Mexicans coming to the US were rapists and criminals.

He also proposed a Muslim ban during his campaign, and then created an executive order titled “Protecting the Nation from Foreign Terrorist Entry into the United States,” that lasted for fewer than three months, despite the fact that it’s more likely that terrorist attacks will be carried out by native-born citizens than foreign-born people.

Long before his campaign, Trump had a history of racism. In 1973, the Trump Management Corporation was sued by the US Department of Justice for violating the Fair Housing Act because officials found evidence that Trump would not rent to black residents and that he lied to them about the availability of apartments.

In 1991, a book by the former president of a Trump hotel, John O’Donnell, revealed that Trump criticized a black accountant counting his money, saying, “I think that the guy is lazy. And it’s probably not his fault, because laziness is a trait in blacks. It really is, I believe that. It’s not anything they can control.” During an interview in the late 90s, Trump said: “the stuff O’Donnell wrote about me is probably true.” This is hypocritical because he said something that was explicitly racist and now claims over and over again that he is not a racist person. To be clear, racism is on the rise, and when we are talking about vaping, we aren’t talking about this.

Vaping, to some, could be considered a drug crisis. This is because of the extreme uprise in teen usage of various e-cigarette products, with more than 42.5% of high school seniors reporting vaping in their lifetime. The Centers for Disease Control and Prevention have identified approximately 450 people who have suffered symptoms of vaping- related illnesses. As of September 12, 2019, 6 people have died from a lung disease related to vaping.

Despite the significance of the issue of vaping, the opioid crisis and deaths and illnesses due to tobacco products are much more severe. 130+ people die every single day from opioid-related drug overdoses. That’s roughly 47,450 people dying from this every year. There are about 480,000 people who die from tobacco usage every year. Even though the death tolls due to opioids and tobacco products are much greater, the government does nothing to ban them.

The government does fund programs such as The Truth Campaign that focuses on the prevention of smoking. The Trump administration has also allocated funding to states to continue combating the opioid crisis, but by looking at statistics regarding opioid and tobacco-related deaths, it’s clear that more needs to be done because based on the numbers, these activities are just a small band-aid for the problem..

The Center On Addiction has recommended four general things to the federal government to lessen the opioid crisis. First, they want the government to prevent the misuse of and addiction to different opioids through developing, funding and implementing different awareness and prevention campaigns in schools and communities, reducing the availability of opioids, and funding research. Secondly, they say that increasing access to naloxone, a drug that prevents narcotic overdose, and funding monitoring of new synthetic opioids will reduce overdose deaths. Next, they want the federal government to improve opioid addiction treatment through improving access to treatment and improving the knowledge of providers of the treatment. Lastly, the Center On Addiction thinks that it is necessary to provide opioid addiction care in our criminal justice system.

According to the Cancer Action Network, about 95% of smokers begin smoking before the age of 21. This means that if the government were to allocate more funding to tobacco/ smoking prevention programs early on, the rate of smokers/ tobacco users overall would drastically decrease. Despite the major health risks of smoking being crystal clear to American citizens for many decades already, the federal government has been slow to do much about it besides enacting prevention programs in schools that have not proven to be very effective. Things that the government could be doing that would be more efficient in decreasing tobacco-related illnesses and deaths are a ban on the advertising of tobacco products, heavier restrictions on smoking in public places, higher taxation on tobacco products, etc.

Additionally, if this is related to what Trump is doing with flavored e-cigarettes, we could even go as far as banning cigarettes, but the government does not want to do that because it would harm the economy, as well as the wallets of representatives of Congress who take money from tobacco lobbyists. Vaping is killing the tobacco industry, so while we’re paying attention to it, we’re ignoring other big issues.

Rather than appropriating funds to unnecessary research studies, tweeting about A$AP Rocky, and becoming distressed about what’s going to happen at the Area 51 raid, our government, especially our president, should be paying attention to what is really hurting the American people- because doing something about what impacts us the most will be what guarantees our survival in the long run.”

In 2017, there were 39,773 recorded gun deaths in the United States. The US places first on a ranked list of top 10 civilian gun-owning countries. For every 100 residents in the US, there are 120.5 firearms. Yemen comes in 2nd place with less than half of that. There’s an average of one mass shooting every day, and this has become the new normal for American citizens. States with more guns have more gun deaths, and states with more regulations on guns have fewer gun deaths. Most suicides (96.5% of them) are carried out by firearms, and policies that regulate and limit access to guns have decreased suicides since 1996 when the buyback program began.

One would think that an average of 100 gun deaths per day and many more people being injured by guns would be enough for the government to do more about the gun violence problem in our country, but it isn’t. In 1996, Congress took away the Center for Disease Control and Prevention’s (CDC) budget to study the health effects of shootings and did not allow the CDC to promote gun control in the United States because of pressure from the National Rifle Association (NRA). To this day, the NRA grades members of Congress and donates money to them if they have a good grade. Congress members can attain a good grade from them if they are against gun control policies.

While it’s certainly acceptable to be concerned about the growing issue regarding vaping, especially among teens, in our country, we need to focus on what’s more important. Rather than appropriating funds to unnecessary research studies, tweeting about A$AP Rocky, and becoming distressed about what’s going to happen at the Area 51 raid, our government, especially our president, should be paying attention to what is really hurting the American people- because doing something about what impacts us the most will be what guarantees our survival in the long run.