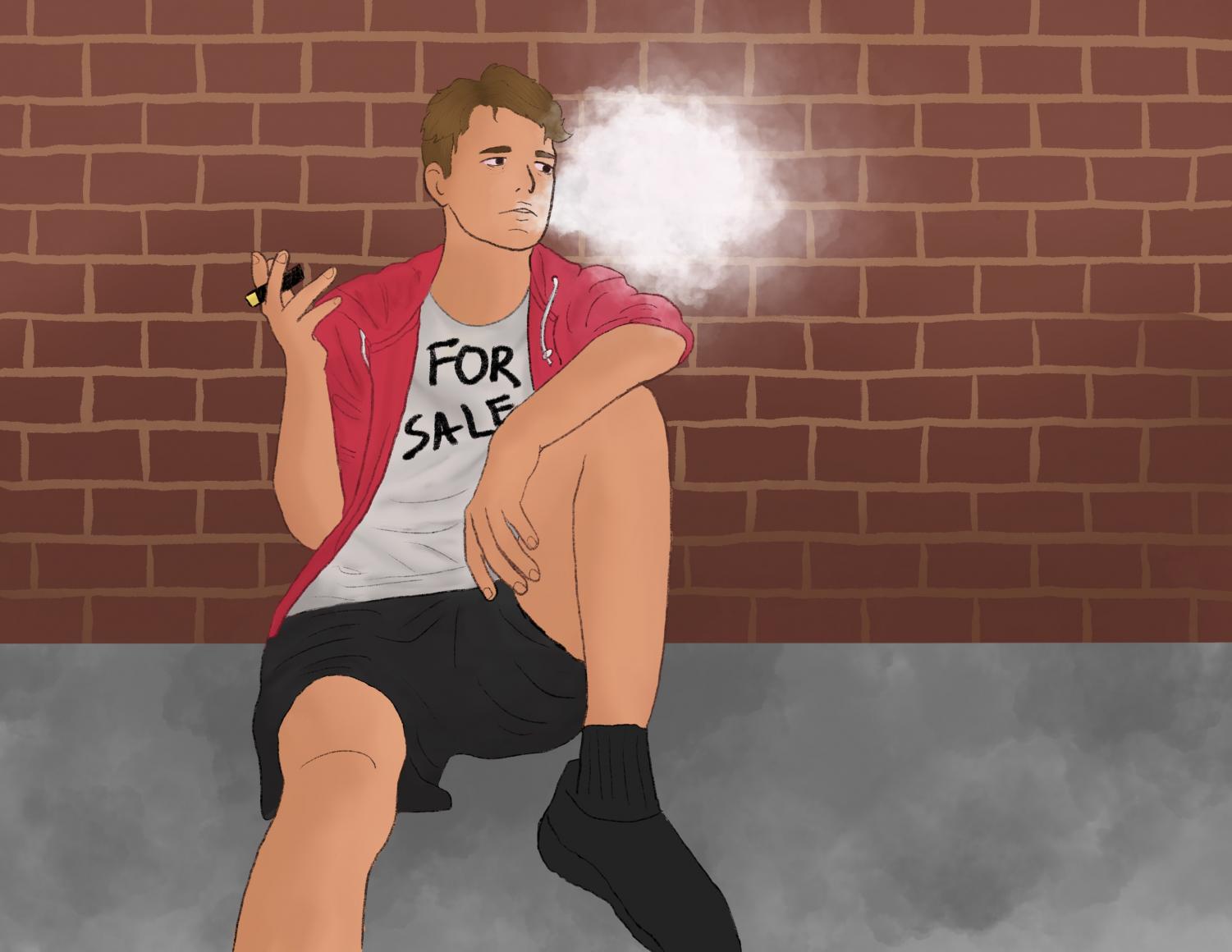 Are students truly for sale? Marketers of e-cigarettes surely think so. (Blaise Husek )

Are students truly for sale? Marketers of e-cigarettes surely think so.

The overlooked corruption of the tobacco industry and how it needs to be combated.

Only recently has the corruption of the e-cigarette industry been unfolding, as vaping-related diseases have led to several fatalities, forcing it to surface in media coverage. Vaping was a proposed option to fill a void for those trying to quit smoking. Now, it seems that while technically the goal was achieved, we have created another nicotine epidemic. The consequences of vaping are unfolding before the public eye. But the question still remains: How did we get here? How didn’t we see this coming? 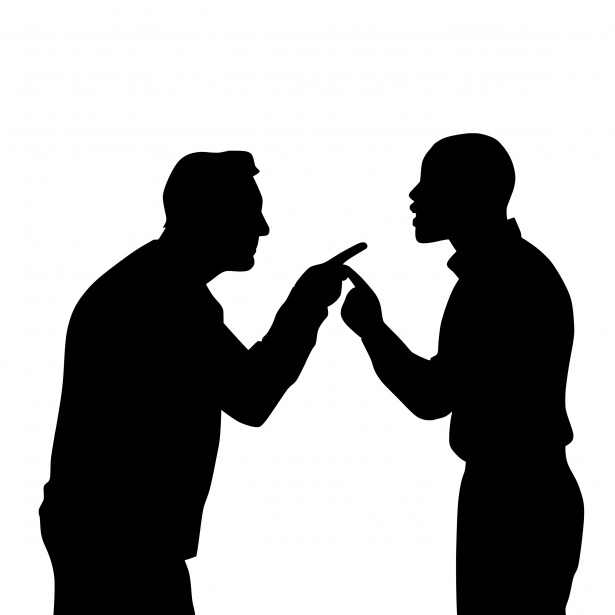 In order to take on this massive problem head-on and actively work toward a solution, it is about time we shift the discussion to actual, effective arguments against the use of vapes, rather than the frankly redundant and unnecessary ones.

An often used tactic is to attempt to scare users by citing statistics such as “people who vape are four times more likely to start smoking cigarettes”, or that the vape is somehow a “gateway substance”, both arguments often stated by the Truth organization. Any reasonable person will look at statistics like this and automatically dismiss them.

Someone being told that they are more likely to start smoking because of their vaping addiction will take this information and just decide to not contribute to the statistic. It is a simple decision they can make without making any changes. If someone wants to smoke, they will smoke, and vice versa. This argument is not going to change that.

Think of all of the arguments used against unhealthy foods. People preach all the time about how the more fast food a person eats, the more likely they are to develop diabetes and other diet-related ailments. The immediate response, obviously, is to just not eat as much fast food. It does not stop people from eating it all together. See the problem? When this argument is actually broken down, it is nothing of substance. There is no actual point.

The former argument is also one to ignore, as literally ANYTHING could be considered a gateway substance. Caffeine is a drug. Is that a gateway substance? Where do we draw the line? The drug is not the problem. If a person is willing to inhale or take lower-level drugs, it is just more likely that they are apt to put even worse chemicals into their body than a straight-edged individual.

These are too easy to disregard and counter. Instead of recycling these useless points, it is time to change the conversation and recognize a simple fact: the tobacco industry is taking advantage of impressionable teenagers. (Again). 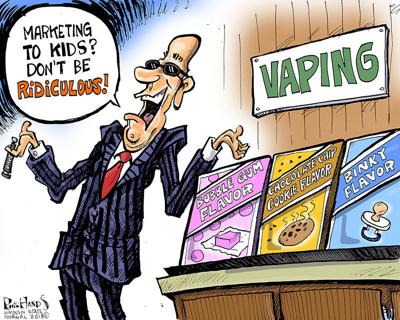 The sight of someone smoking has become a sort of rarity now, and many argue that it is a good thing, therefore justifying the use of vapes. Of course, they are not entirely off. No one is going to argue that the decreased rates of smoking is not a positive result of the current situation.

In 2017, the lowest smoking rate among adults in the United States was recorded by the Center for Disease Control and Prevention , coming in at 14%. However, the same study concluded that one in five adults still use some tobacco-related products, whether it be an actual or electronic cigarette. Since 2017,  this has altered drastically, due to the massive popularity of e-cigarettes. The most recent data shows that from 2011 to 2018, the amount of teenagers in the U.S. increased from 220,000 to just over 3 million. That is 20.8% of teens. The effects are blatant.

While we are telling ourselves that this is some profound, awful thing, the tobacco industry has done this same exact routine before. It is the transition of dishonesty from the lie of cigarette effects to the lie of vaping effects. And yes, vaping is the lesser of two evils.

However, being the lesser of two evils is not necessarily such high praise. Just because hitting a Juul is not AS BAD as smoking a cigarette does not mean that there will not be consequences for doing it. Not to mention that at one point, not too long ago, smoking was not considered a threat to health.

In 1964, the first report of the Surgeon General was released on smoking, and at the time, the smoking rate was 40% among Americans, according to the  National Center for Biotechnology Information . This was at the peak of the smoking epidemic, and as more and more information started to surface, rates began to decline. People were now being made aware of the fact that their addiction was going to lead to potentially terminal illness and a drug dependency.

These corporations KNOW what they are doing. They know that they can cater to people by offering an alternative, and it makes them money. Flavoring their product contributes to this problem, as this distracts from the harmful behavior by, quite literally, sugar-coating it.

In this era, however, there is a key difference from the former: the expansion of knowledge.

This is not our first time dealing with this kind of deception. The tobacco industry has already made it clear that they are willing to throw their own customers’ well being out the window when it comes down to profits. In the age of the internet, information can be spread in seconds. The process of exposing their wrong-doings is moving faster than it was in the midst of the smoking epidemic. And this is not even taking into account the advancement in medical sciences that can easily debunk the rhetoric spread from tobacco companies.

The health effects of vaping have also proven to be more immediate, with six vape-related illnesses becoming fatalities already in the past year. Vapes have not even had consistent popularity for a decade yet. We are catching this in time. We can do something about industries exploiting vulnerable people before it is too late.The long term effects of vaping are not yet known,  and we do not want to look back on this time period and regret not taking action when we do find out. 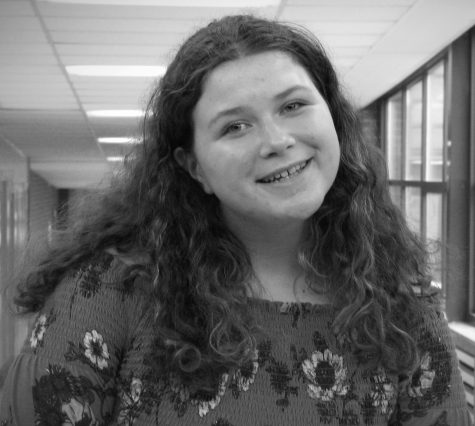 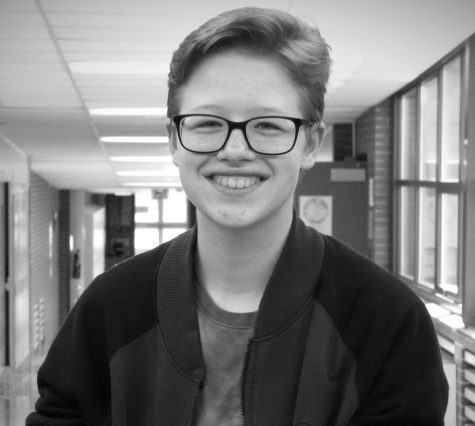 Blaise Husek is a freshman at North Allegheny Intermediate High School. This will be his first year on a newspaper staff, which he is very excited for....