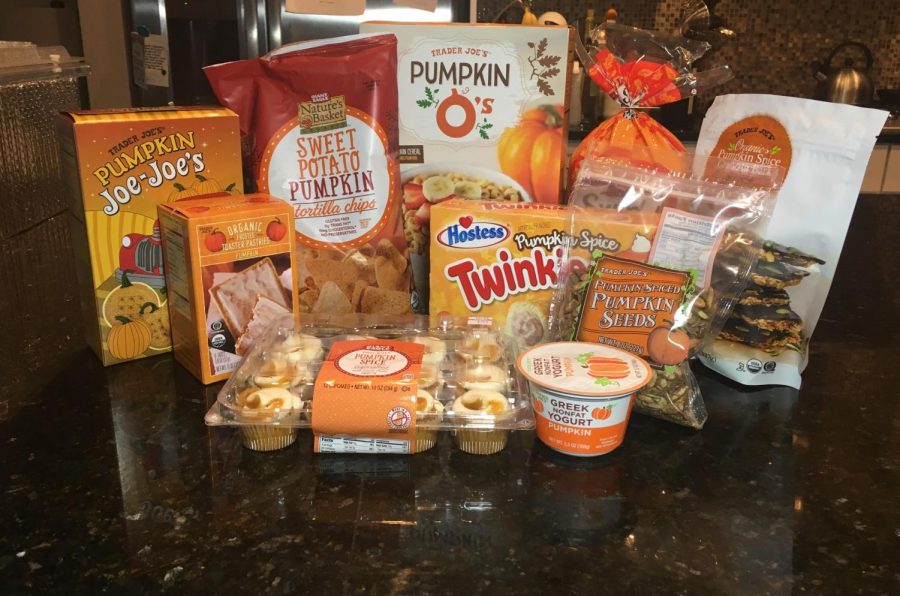 What happens when you buy every single pumpkin spice product you see?

The only thing more important than pumpkin spice is… nothing.

So what is pumpkin spice? Pumpkin spice is a mixture of cinnamon, ginger, nutmeg, cloves, and allspice.  It’s known for its notorious flavor during the fall season, especially in a PSL aka pumpkin spice latte. However, this well-known seasonal flavor has been incorporated into many other foods and drinks over the years.

I have come to test out different pumpkin spice foods and asked peers to test which ones are worth trying. On each day, for 2 weeks, I will be trying out 10 different pumpkin spice flavored foods. I will be summarizing what I thought about the food and rating them based on two different categories: on a scale of 1 to 10, 1 being the worst and 10 being the best, how pumpkin-spiced the food is and on a scale of 1 to 10  how well it tastes. I will then also have a final verdict at the end to conclude my thoughts.

At the end of each food, I will also have others’ opinions on the food and their ratings. So, let’s spice it up! 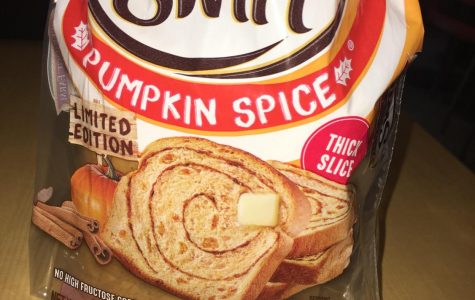 For those familiar with cinnamon toast, this is Pepperidge Farm’s P.S. version. Though the packaging claims to be pumpkin spice swirl bread, there is very little to no pumpkin spice flavor in this breakfast treat. In fact, the consumer might think that the bread is closer to a soft, fluffy, cinnamon toast if anything. How Pumpkin Spicey: 2 How Good It Tastes: 6 Verdict: not terrible, but doesn't fulf... 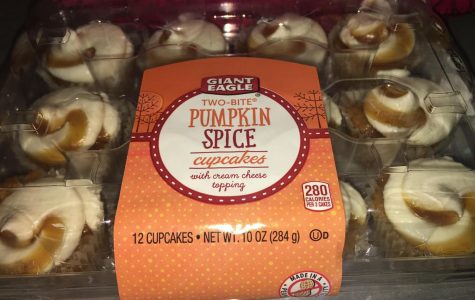 Although these cupcakes are adorable in size, they definitely pack in the pumpkin spice flavor! This dessert was nice and moist and had a gooey, cream cheese frosting that was almost like marshmallows.  There’s the saying “you can never have too much of a good thing.” But, in this case, you can. I thought there was too much frosting thus resulting in the cupcake being a tad too sweet. How P... 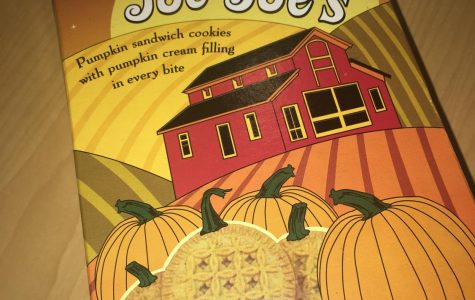 If you want a fall cookie that you’ll never get sick of this is a snack for you. These off-brand Oreos’ are a perfect combination of sweetness and pumpkin spice. When you first bite into the cookie, the fresh, creamy filling stands out immediately and was overfilled that it was oozing out on the sides.  I did not mind it at all though because these cookies were the epitome of PS… thus far. ... 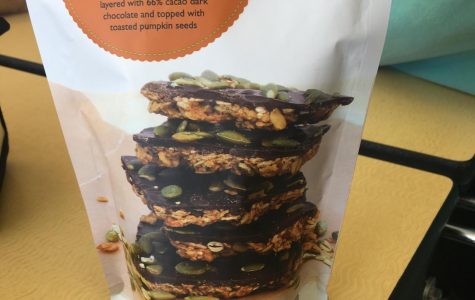 This PS snack is a healthy granola bar but with a twist. Instead of just oats, grains, and honey, this bark includes dark chocolate, pumpkin seeds, and of course, the pumpkin spice flavoring. Because the bark is made up of many ingredients, it is full of so many different flavors that I don’t think it enhanced the pumpkin spice to its full potential. I will say, I do love the diverse layers of t... 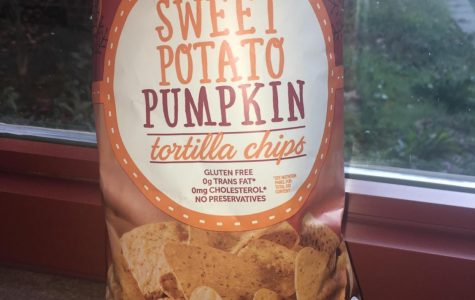 My first thought when I bought these was “this looks gross” because of the sweet potato and pumpkin combination, but these tortilla chips surprised me. The texture was weird because the chip sort of dissolved immediately and melted in my mouth but the chips actually tasted pretty good. The only downfall of the chip was it did not have as much pumpkin spice flavor compared to the other products.... 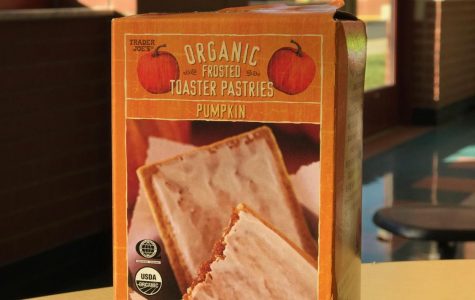 Trader Joe’s outdoes themselves once again! These toaster pastries were filled with the perfect amount of pumpkin, spices, sugar, and pastry crust. I truly have nothing to complain about because they were simply perfect, except who ate all the pastries? How Pumpkin Spicey: 10 How Good It Tastes: 10 Verdict: the season of fall  in a little, tiny box     Abbey Hahn Intervie...

This was definitely the worst food I bought and although the yogurt smelled good, the taste was repulsive.  How Pumpkin Spicey: 2 How Good It Tastes: 1 Verdict: it was edible   Disclaimer: I could not interview people with this food because it is hard to share yogurt with others. ... 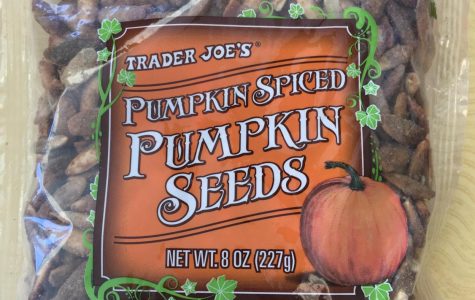 If seeds give life to plants, then I bet these pumpkin spiced pumpkin seeds would bring utter joy to them because they are delish! These seeds are a sweet, salty, and nutty treat that is irresistible, and I think I could eat the entire bag in one sitting.  How Pumpkin Spicey: 6 How Good It Tastes: 9 Verdict: a fun way to SPICE up pumpkin seeds     Sara Hogan Interview: "T... 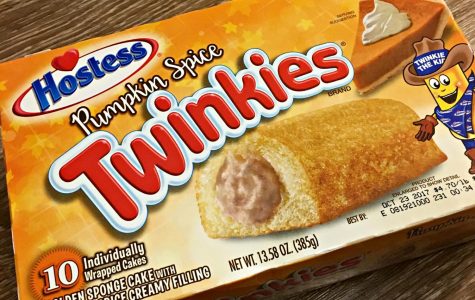 One of America’s most iconic treats decided to join the PS bandwagon...Twinkies! The cake is the familiar yellow sponge cake, but the filling had the added pumpkin spice seasoning. The frosting was not creamy and extremely sweet. There may be a bias on my part because I personally do not like twinkies in general. How Pumpkin Spicey: 7 How Good It Tastes: 7 Verdict: giving me a toothache j... 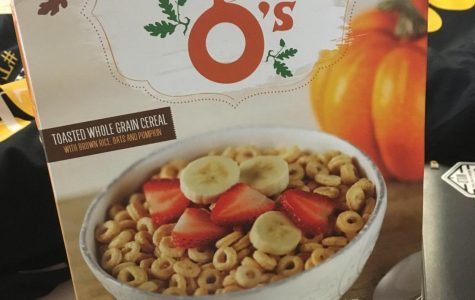 Since breakfast is the most important meal of the day, we decided to tackle the PS version of the Trader Joe’s O’s cereal. This cereal is filled with fiber, grains, and pumpkin spice! The more I ate the cereal the more PS flavor I got. The cereal O itself was definitely not like your average Cheerio, but more like an airy, fruit loop shape. The cereal itself was pretty good, and after I ate it...